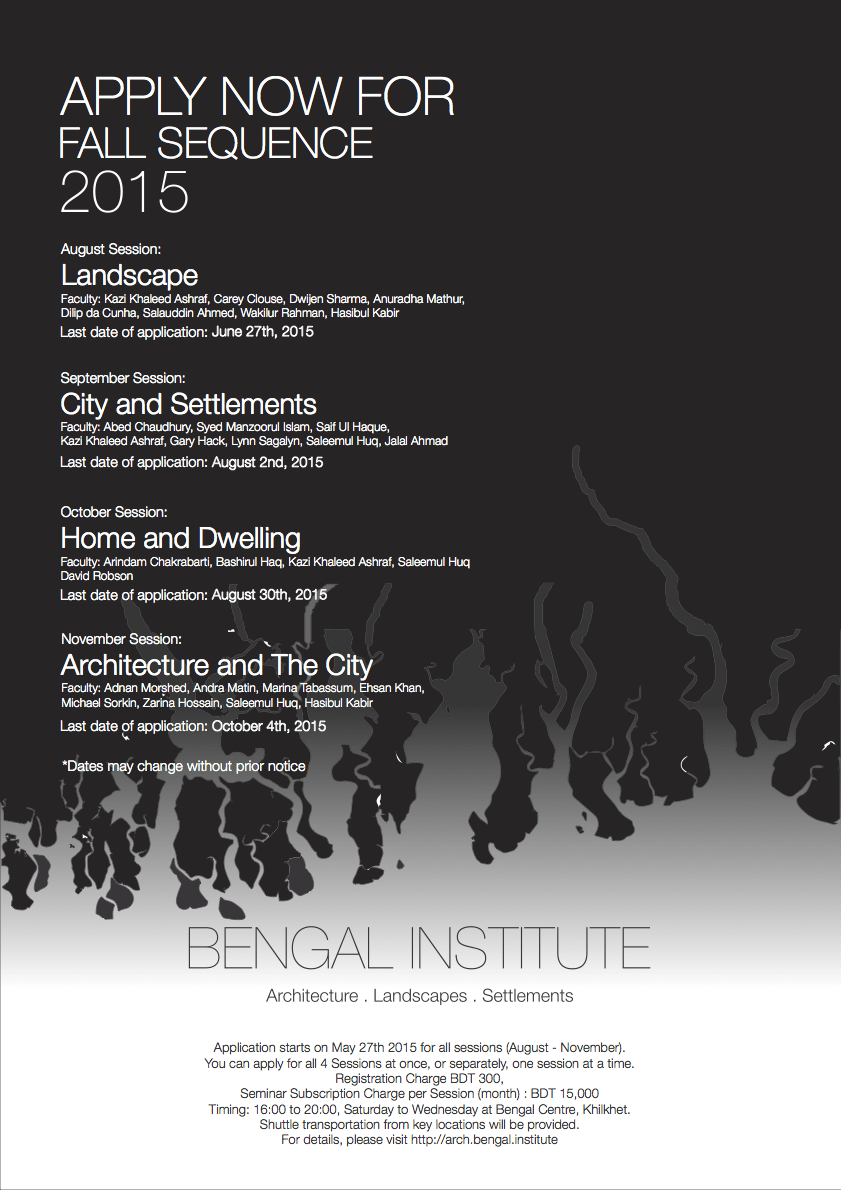 August Session was focused on understanding “Landscape” under a broad spectrum. Landscape is deeply intertwined with dwelling, cities and regional infrastructure.

The seminar will introduce theories and techniques for landscape architecture, with a focus on the South Asian context. Discussions will also address the fundamental principles of urban design, making connection between design disciplines and the public realm. This breadth of scope establishes a shared framework, vocabulary, and methodology for the study of urban place-making, setting the foundation for future coursework.

Imaging / Imagining in a Terrain of Rain

The workshop will introduce participants to modes of visualizing place, landscape, and the terrain itself. It will probe taken for granted vocabularies and the ‘natural’ status of things that are drawn as the ground on which design sits. More than a palette of techniques, the workshop will suggest that places demand invention in how they are articulated and experienced as the starting point of design. The format will be of presentations followed by discussions and fieldwork followed by pin-up and reflection on a day’s work.

Seminar: Theories of Architecture and Landscapes

Theory is the Siamese twin of architectural design, forming and informing each other. As an introduction to key theoretical and critical positions shaping the architectural and urban landscape today, the seminar will help participants in orienting their design attitudes and standpoints. Through discussions of important works and ideas, the seminar will investigate the range of architectural production today, and examine the themes that condition the production, and the interpretive and critical methods that elaborate it. Topics to be covered include: concepts body, building and design; theories of styles, origin and beginning; nature, landscape, and site; language of architecture; Modernist ideologies and productions; post-modern conditions and motives; community, identity and regionalism; consumer culture and populism; and digital configurations.

Participants will be taken on a real and virtual tour of villages in Southern part of greater Sylhet. History of human settlement will be described to explain why and how certain features of the human habitat developed. Taming of the wilderness dating back to hundreds of years will be explained in the context of land tenure system cropping pattern early roads and also rural architecture. Roles of rivers will be emphasized. In the background of such a history a pathway to forward will be explained incorporating ecology, climate change, sustainable water usage and novel ideas of architecture.

Contemporary cities need to be designed, not be the accidental outcome of individual public and private decisions. There are, of course, many ways to design cities, and many aspirational and pragmatic purposes to be served by their design. The course will focus on design strategies and examples, and the role they can play in solving contemporary issues cities face. Each session will have two parts, beginning with a lecture by Professor Hack with many international examples, then following with a discussion about how these ideas might influence the practice of designing and building settlements in Bangladesh.

Seminar on City, Culture and Architecture

The workshop will study the evolution of the city (political/mercantile/industrial/post industrial ‘urban’) in both South Asian and global contexts and the endless shifts it is going through in its search for a stable identity. Saif Ul Haque will focus on the history/ lineage and transformation of the South Asian cities, and Manzoorul Islam will concentrate on the cultural, sociological and ethnographic aspects of the city, comparing South Asian and world cities for an understanding of the semiotics the methodologies of the urban space. Our aim would be to present the city in all its complexities and possibilities so that participants can understand the imperatives behind its transformation from an organic space to a critical zone. Participants will theorize on the city, coming up with their own imaginaries (in both their ‘soft’ and ‘hard’ versions). These will hopefully provide alternative routes to reaching the city we all desire.

Opening the Door of “my” Home

Lalan Fakir famously compares the human body with a cage in which an unrecognizable bird (“achin paakhi”) dwells and flies in and out. But this cage itself seems to need, though not always find, a suitable enclosure to dwell in. We call this cage of a cage a “home.” Three verb-related case-roles (“karaka”) of Sanskrit grammar capture different features of our concept of home: the locative (wherein), the ablative (wherefrom: the place one has left) and the accusative (whereto: the target dwelling one wishes to settle down in). In this analytical and phenomenological investigation, the relationship between the embodied self, it’s skin, it’s clothing and the home will be explored, from Western and Eastern metaphysical and ethico-political perspectives. The ethical metaphysics of “home-ownership,” Hannah Arendt’s concept of a public versus a private realm, current debates regarding privacy (of one’s “home-page”?) will be touched upon, as crucially as Rabindranath Tagore’s recurrent idea of the liberating light of one’s life coming through breaking the front-door of one’s home on a stormy dark night. The new homelessness of globally raised children will be compared to the homelessness of the economically marginalized and the chosen homelessness of the ancient Buddhist and Jaina monks.

Design Studio: A Home in the Village / A House in the City

Seminar: The Enigma of Geoffrey Bawa

Although he is generally acknowledged to have been one of the most important Asian architects of the second half of the Twentieth Century and although much has been written about his life and his work, Geoffrey Bawa remains something of an enigma.  Who was he? From where did his architectural genius spring? What were his formative influences?  What was his legacy?  This seminar will attempt to develop an understanding of how Bawa was able to make the sudden transition at the age of thirty-five from dilettante lawyer to committed architect and to identify the sources of his inspiration. It will discuss the role of the Architectural Association in his formation and examine the influence of Minnette de Silva, his immediate predecessor, and of Ulrik Plesner his sometime collaborator.  It will discuss Bawa’s move away from Tropical Modernism towards Regionalism at the end of 1950s and analyse key projects undertaken under the aegis of Edwards Reid and Begg during the main part of his career which spanned from the early 1960s until the end of the 1980s, as well as during his last decade when he worked within a small home-based design studio to produce designs of astonishing originality. Finally the importance of his work for post-independence Sri Lanka and its wider significance for South and Southeast Asia will be discussed.

One necessary solution to the exponential growth of the world’s cities is to build new ones.  Of course, they must be sustainable, equitable, beautiful, and “smart.”  But what does this mean?  Where does urban intelligence lie?  What must a city know about its place, culture, and climate?  We’ll investigate these questions by designing a new city not too far from Dhaka and subject to the exigencies of the South Asian delta and to the tribulations and aspirations of Bangladesh.

Inherent vitality and cultural environment, unique natural surroundings and worthwhile architectural heritage embody many of the small towns in Bangladesh. While opportunities still exist to preserve and enhance these settings, there is the threat of losing such chances due to inattention and unguided or misguided development. In terms of settlement planning and design, this workshop will try to identify and analyze the unique characteristics of the town? What are its potentials and what challenges does it face?  What type of intervention can inspire and enrich the lives of its residents? What will make it attractive to investors and visitors? The study will be limited to three to five small towns in a variety of settings. The workshop will comprise of theoretical concepts, and hands on approach of fact-finding, recording, analysis and response. The output will comprise of inventories, analysis, manuals, standards, reports, planning and design statements and visuals.

Seminar on History and Theory of the City

In the “Chandimangal” written in early 17th century, Mukundarama describes the founding of Gujarat by Kalketu. As a visionary plan of a city, Gujarat reveals a spatial and social organization unique in Bengali cultural production. Using the description of the layout and organization of Gujarat, the design workshop will conduct exercises in methods of urban analysis and representation, and conceptualization, imagination and visualization of urban schemes. In the process, participants will gain a systematic understanding in techniques and approaches of urban design.