Kee Foong of Design Anthology Asia magazine interviewed Kazi Khaleed Ashraf in mid 2018, the article based on the conversation published on the 17th issue of DA

Copy of the Text

Set back from the chaos of a major road in central Dhaka is a low-slung 1950s pavilion that attracts little interest from passers-by.
There is no grand entrance and the concrete and corrugated-brick pavilion, home to the University of Dhaka’s Faculty of Fine Arts, is hidden among the park-like grounds. Yet it is an architectural treasure — Bangladesh’s first modernist building — designed by Muzharul Islam, the nation’s most feted architect. Well- preserved and still in use today, the building and its surrounds host students in breezy classrooms flanked by a wall of windows or under wide verandas and shady trees, where they sketch and paint.

A few minutes’ walk away, another of Islam’s buildings — the university’s library — was completed around the same time. Extensive renovations have, however, detracted from the airiness of its original design, though visitors can still admire the double-height reading room, hairpin ramp and vaulted rooftop.

Islam, who studied in the United States before returning to Bangladesh, believed that architecture, activism and politics were intertwined. It was a turbulent time in what was then East Pakistan, following the end of British rule and before independence. The architect embraced modernism as a conscious rejection of the ‘stigmatised architecture of the colonial West or the fossilised and sometimes socially repressive practices of tradition’, explains Kazi Khaleed Ashraf of the Bengal Institute for Architecture, Landscapes and Settlements.

Not only was Islam a pioneer of modern architecture in South Asia, he believed that architecture could and should serve the people. According to Ashraf, Islam ‘saw and participated in advancing architecture as a nation-building enterprise’. His standout projects were public, including the University of Chittagong with its terraced facade that mimics the surrounding hills, and Jahangirnagar University with its striking geometric shapes wrapped around a large lake. Moreover, contrary to popular criticism of modernist architecture, Islam’s buildings are highly contextual and considerate of climate and landscape.

The country can also thank Islam for its architectural jewel. Invited to design the National Parliament House, he demurred, recommending instead that an internationally renowned architect be appointed. When Alvar Aalto and Le Corbusier declined (Corbusier was busy completing his master plan for the Indian city of Chandigarh), Louis Kahn, who had taught Islam, was commissioned. Commenced in 1961 when Bangladesh had yet to achieve statehood and taking more than 20 years to build, the result is a 20th-century masterpiece.

A vast lawn, stepped plaza and lake separate the parliament from the entrance gate, and the monumental scale of the complex is not immediately apparent. Once inside, visitors are shepherded through a maze of towering corridors to a soaring atrium — a futuristic mini-city complete with street lamps and recessed walkways.

Abstract geometric shapes cut into concrete walls show off Kahn’s mastery of light and shadow. The centrepiece Parliament Chamber is a magnificent hall crowned by a parabolic shell roof 35 metres above, showering the space in natural light. During the day, one can see clearly inside, even with the lights from the suspended web of chandeliers switched off.

Though sadly off limits to the public except through a tedious visitor application process, the complex is an immense source of pride for Bangladeshis, an international icon in an unlikely city. To Ashraf, it represents a ‘restoration of a sacral or ineffable dimension in architecture’.

While there is no single Bangladeshi aesthetic, architects and planners have had to tackle common problems. As part of the world’s largest delta, much of the country’s landscape is defined by water, with severe monsoons, cyclones and flooding a harsh reality. Extreme poverty, population density and limited budgets compound the challenges.

Two recipients in the most recent award cycle of the prestigious Aga Khan Award for Architecture (who coincidentally had previously worked together on Dhaka’s Independence Museum before going their own ways) won for projects in Bangladesh, and the influences of Kahn and Islam are visible in their works.

Marina Tabassum’s Bait Ur Rouf mosque in Dhaka is a squat brick block minus the domes and minarets associated with the type, and doubles as a community centre. Sunlight pierces the dim room through perforated brickwork, while air shafts help cool the space, which sits on a raised foundation to reduce flood risk.

In rural Gaibandha District, Kashef Mahboob Chowdhury’s Friendship Centre is an open-air training and education complex partly inspired by the nearby ruins of Buddhist monasteries but with modernist lines. The centre, built on lowlands within a flood zone, is protected by embankments and a clever drainage system. Here, as in many of Bangladesh’s most significant buildings, brick is integral to the structure.

While the international reach of modernism is strong in Bangladesh, it might be surprising to learn that, according to Ashraf, Bangladesh plays a conversely important role in the broader narrative of architectural modernism. Bungalows, so common throughout America, Australia and Asia, are derived from rural Bengali huts. And it was through Kahn’s Parliament Building that ‘the maligned topics of spirituality and landscape orientation in mainstream architectural discourse’ have seen a resurgence. 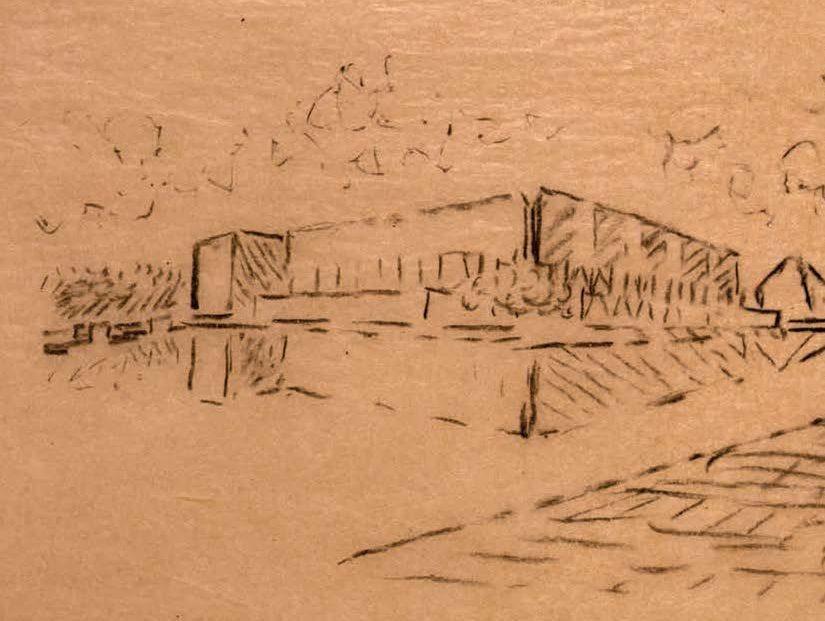 Legacies That We Leave Behind An interview with Balkrishna Doshi