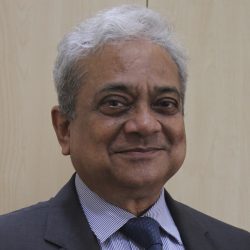 Professor Baaquie joined the Department of Physics at National University of Singapore in 1984 as a Senior Lecturer and retired as Professor on 30 June 2016.

Professor Baaquie joined the Department of Physics at the National University of Singapore in 1984 as a Senior Lecturer and retired as Professor on 30 June 2016.

Although his specialization is quantum field theory, Professor Baaquie has varied and multifaceted research interests. He has an abiding interest in the foundations of quantum mechanics, on which he has written a monograph; he has applied the mathematics of quantum field theory to such diverse subjects as finance, microeconomics and the modelling of human consciousness. He was actively involved in developing undergraduate pedagogy and has written two undergraduate science textbooks for non-specialists.

He is one of the pioneers in applying the quantum approach to mathematical finance and has written two books and many papers on this subject. Prof Baaquie has also proposed a statistical formulation of microeconomics that includes the theory of commodity prices, and which has been empirically tested with good results.

After retiring from NUS Prof Baaquie is taking up the position of Professor of Finance at INCEIF, The Global University of Islamic Finance, Malaysia.

Prof Baaquie was featured in the July 2013 issue of Physics Matters, the departmental biannual newsletter.