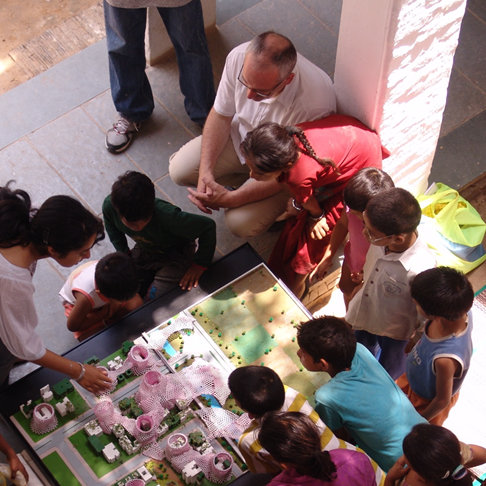 Professor Anne Feenstra was the Dean of the Faculty of Architecture, CEPT University in Ahmedabad, India from 2015 to 2017. His award winning designs and methodologies have been exhibited in 15 countries and his work is published widely....

Professor Anne Feenstra was the Dean of the Faculty of Architecture, CEPT University in Ahmedabad, India from 2015 to 2017. His award winning designs and methodologies have been exhibited in 15 countries and his work is published widely in architectural magazines/books and main stream media. He gives lectures and workshops all over the world. He divides his time in South Asia between practicing and teaching.

Anne Feenstra received his M.Arch. from the T.U. Delft in 1993. In 1999, he joined William Alsop in London. In 2004 he left for South Asia to teach pro-bono at the Kabul University. He opened two AFIR offices in Afghanistan; Kabul (2004), Kholm (2008). He worked on a diverse spectrum of projects including the first National Parks of Afghanistan. He restored the National Museum in Kabul and six other historic buildings incl. a 170-year old subterranean hammam. UNESCO uses his work as a best practice example for community-based heritage. For UNICEF, he designed and built five Maternity Waiting Homes all over Afghanistan.

Feenstra was recruited in 2009 by the School of Planning and Architecture in Delhi, India. Under Prof. Chishti’s Studios, he guided final year students in 2009 and 2010. With four of his ex-students, he set up a non-profit arch i platform –exploring design- to work on rural projects in Sikkim, Assam, Uttarakhand, Ladakh and Punjab and urban processes like DELHi2050 and Mussoorie2040. In 2012 his inclusive, sensitive and inspiring body of work (Afghanistan and India) won him the Global Award for Sustainable Architecture in Paris (LOCUS/LaCitE/UNESCO).

By 2013 he had left Afghanistan and established Sustainable Mountain Architecture in Kathmandu, Nepal. SMA has successfully designed and built 17 pro-people, pro-ecology, material up-cycle, research-based projects. After the devastating 2015 earthquakes, the team went all out to help and developed Transitional Homes and uses rubble to re-build incl. 1452 historic Jhigati tiles for the Stairway to Sky pavilion. At present the waste-upcycle/interpretation center SagarmathaNext is under construction at 3800 m. altitude. 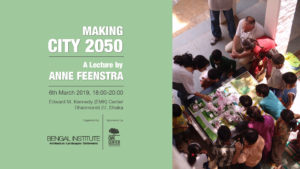 A lecture by Anne Feenstra on 6th March 2019 at EMK Center, Dhanmondi, Dhaka