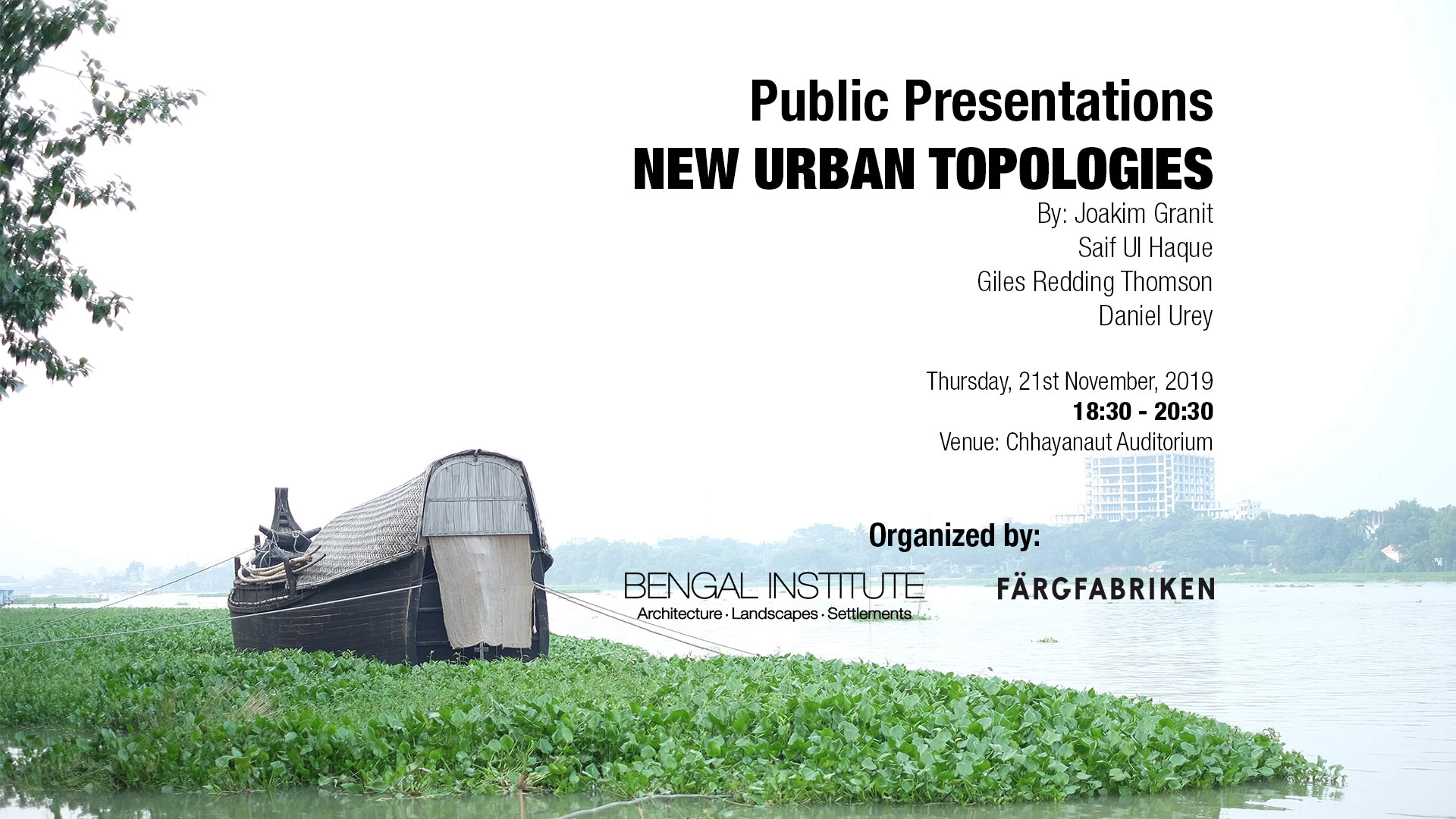 Three members of Färgfabriken speak about the urban transformations around the world through political, architecture and social perspectives.

The New Urban Topology is about urban planning, about socio-economic aspects of the city, about inclusive communication between all stakeholders and about infusing art and architecture into the planning and communication process.

NUT Dhaka will put great emphasis on an interplay between city planning, art and architecture and look particularly into the benefits of artistic inputs to urban engineering.

This program consists of a few short presentations on the discussions and workshop outcomes, open for all.

New Urban Topologies was initiated by Färgfabriken Centre for Art, Architecture and Society in Stockholm, Sweden 6 years ago. Färgfabriken is an independent, non-partisan foundation, financed by both the public and private sectors. Since then, the project has been set up in 12 countries in three continents.

As part of the three-day program on New Urban Topologies-Dhaka, Bengal Institute for Architecture, Landscapes and Settlements is organising public presentations with Fargfabriken on the third and final day of the program.

The public presentations will include:

Giles Thomson: “The western model for sustainability is no longer fitting and yet it prevails.” See more at https://t.co/n2iwoX4u3P #urban #architecture #topologies #BIPL46 https://t.co/sJxzqN8PY6 pic.twitter.com/y1vrkWxJ1t

Daniel Urey from @fargfabriken: “Once upon a time economy was part of the nature, now nature is part of the economy.”
See more at https://t.co/n2iwoX4u3P #urban #topologies #architecture #BIPL46 https://t.co/iUknSvFpXb pic.twitter.com/BaQ6CEefd6

Daniel Urey: “The countrysides are a crucial part of modernity, but unfortunately they’re considered as the backstage of modernity. They’re local and global at the same time”
Organised by @BengalIALS and @_fargfabriken
New #Urban #topologies #BIPL46
https://t.co/n2iwoX4u3P

Daniel Urey: “So what to do deal with these challenges? The answer is in #rural epistemology. We wonder is the village still rural? Is the city still #urban? Is the #nature still natural?”
Organised by @BengalIALS and @_fargfabriken#BIPL46 https://t.co/n2iwoX4u3P

Short link to this page for easy sharing: http://bit.ly/BIPL46