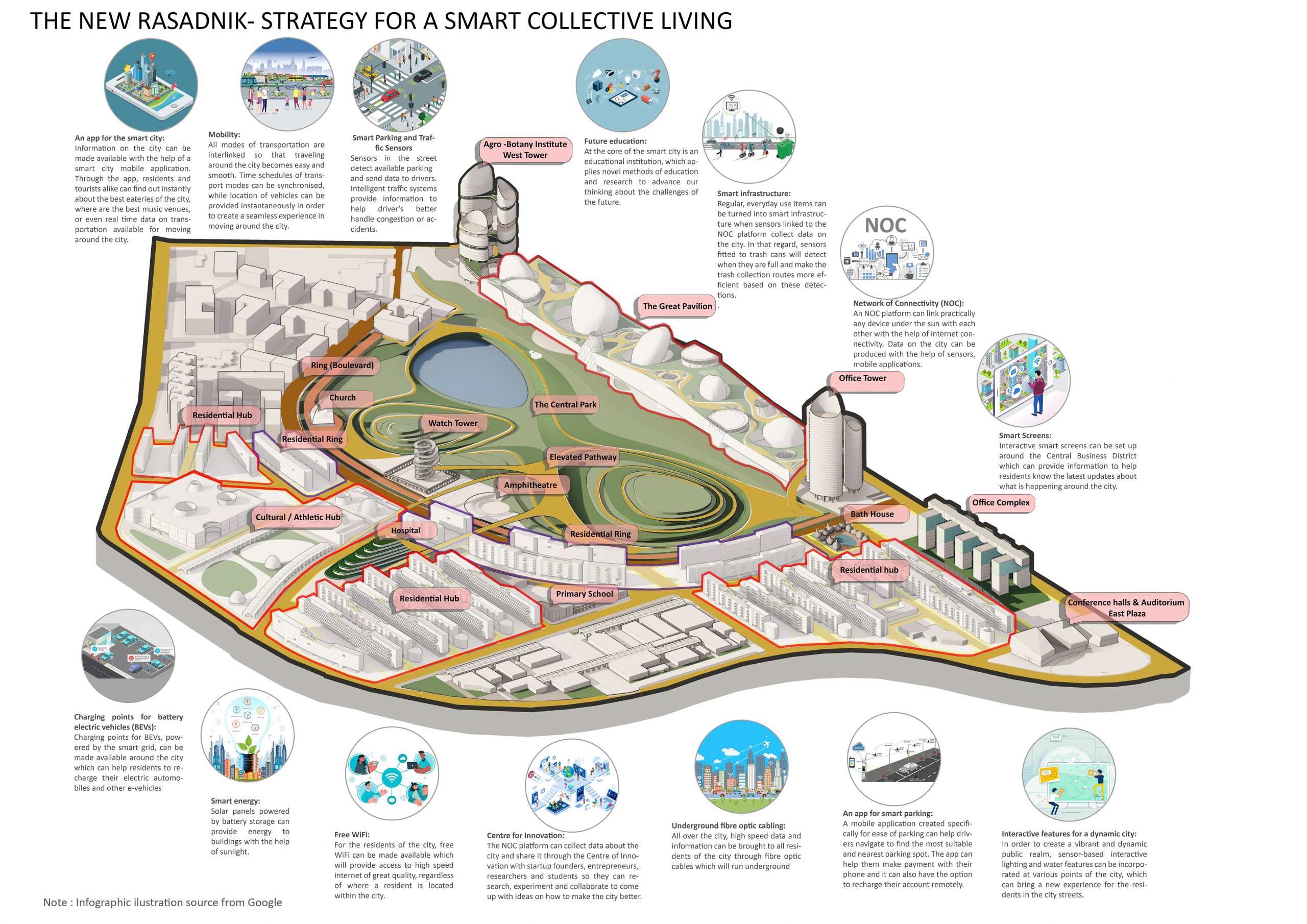 The new Rasadnik- Strategy for a smart collective living 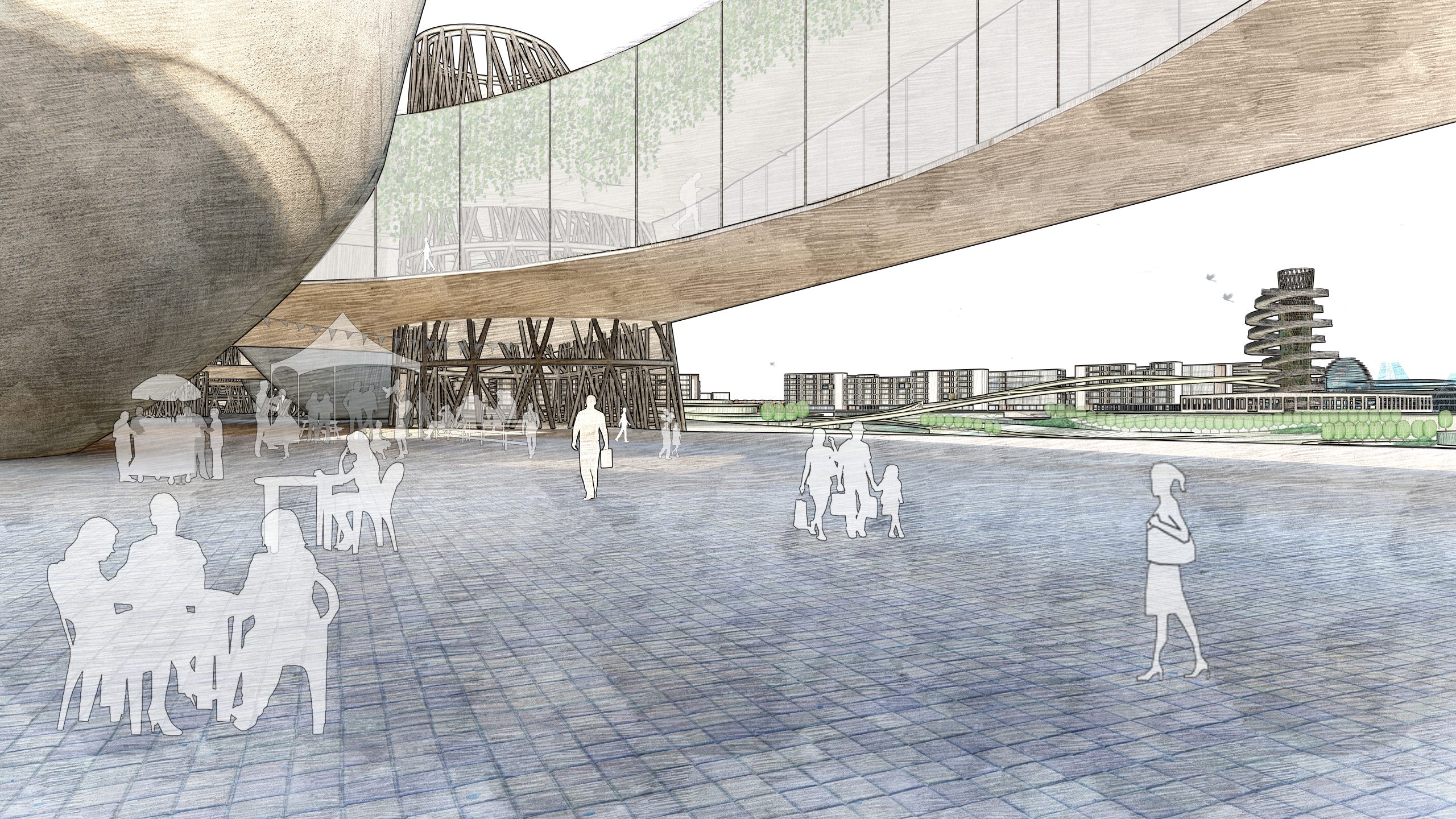 View from within the premises of the great pavillion 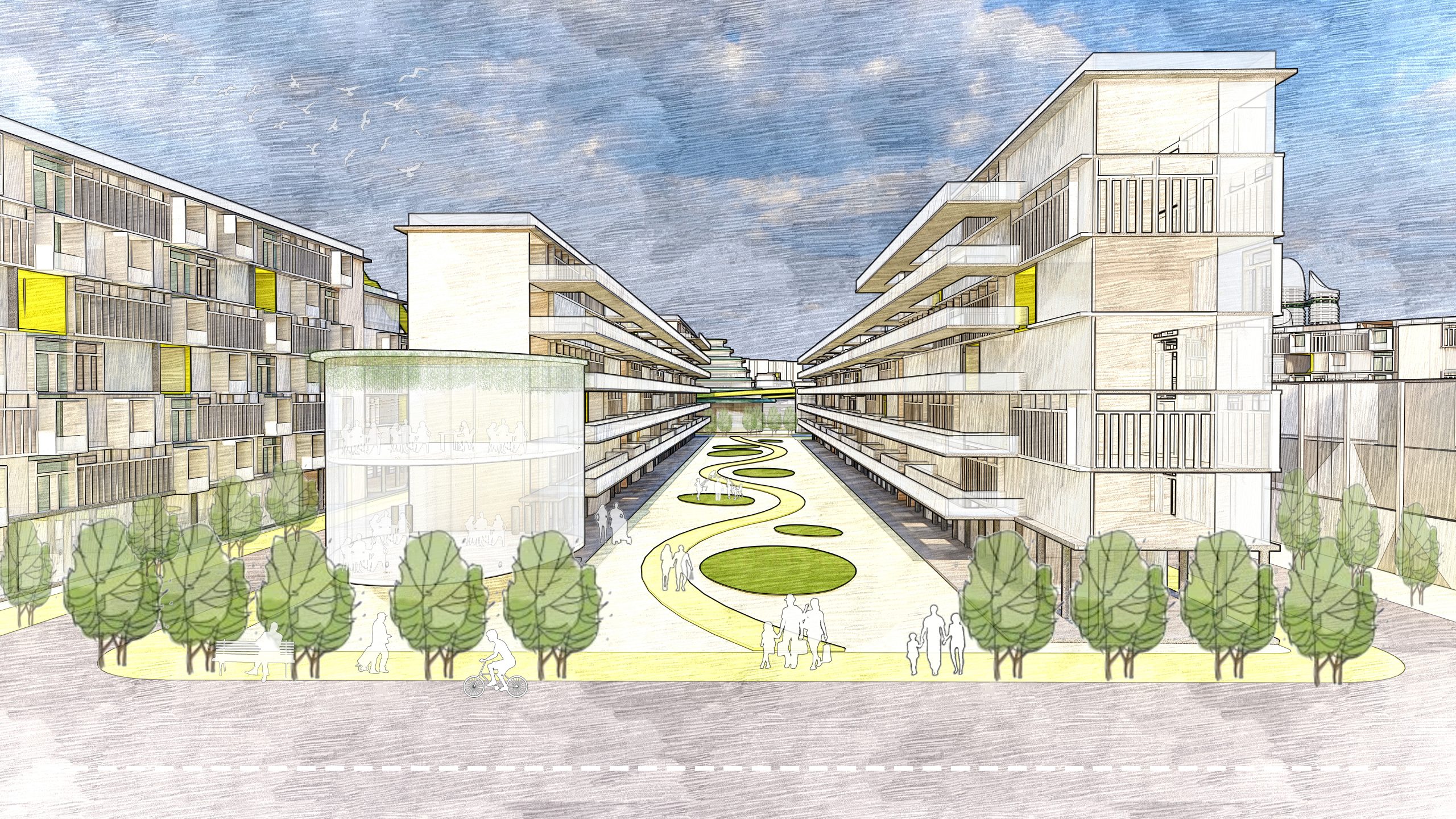 View of housing and internal courtyards 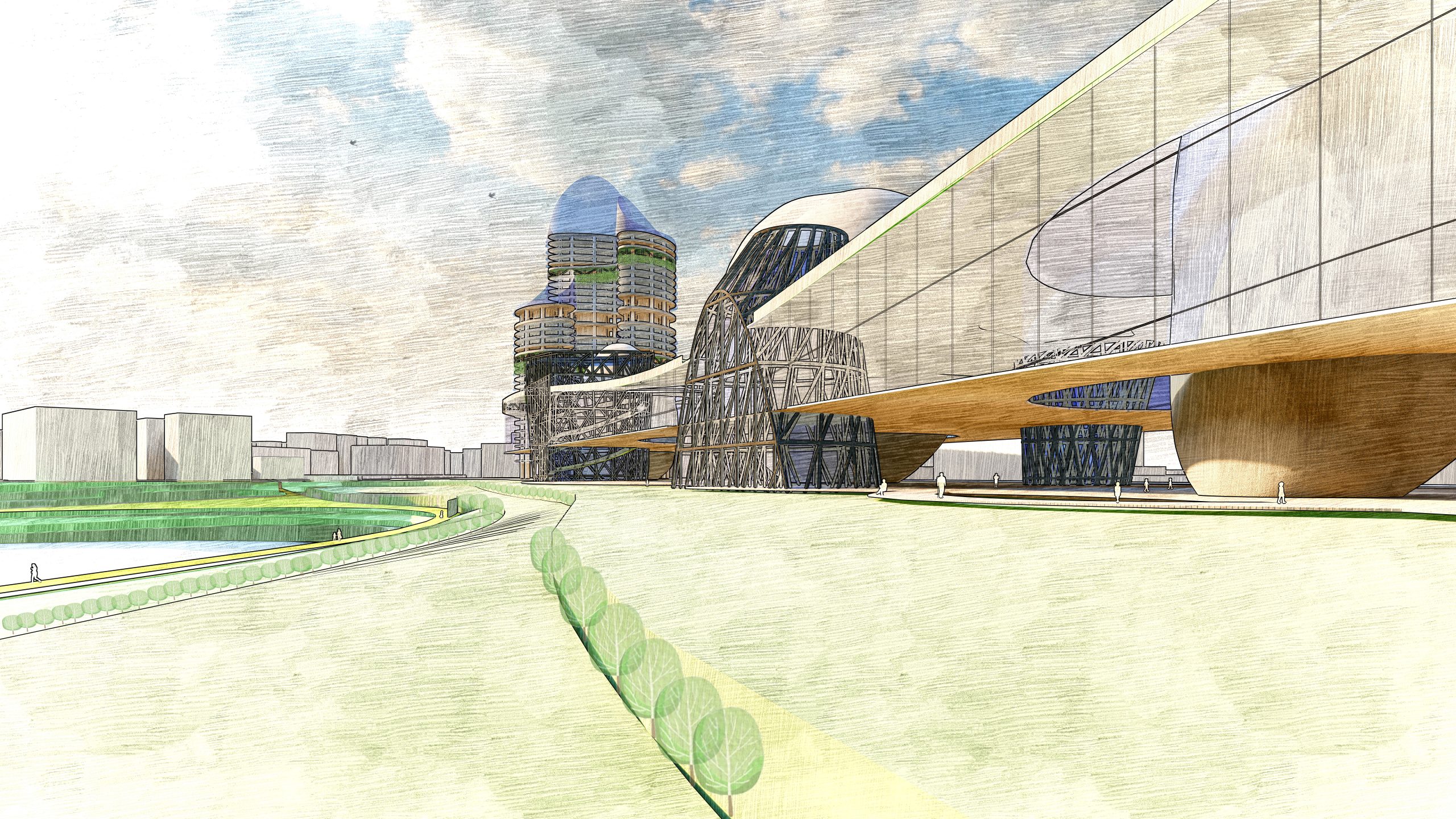 View of The Great Pavillion along with The Central Park 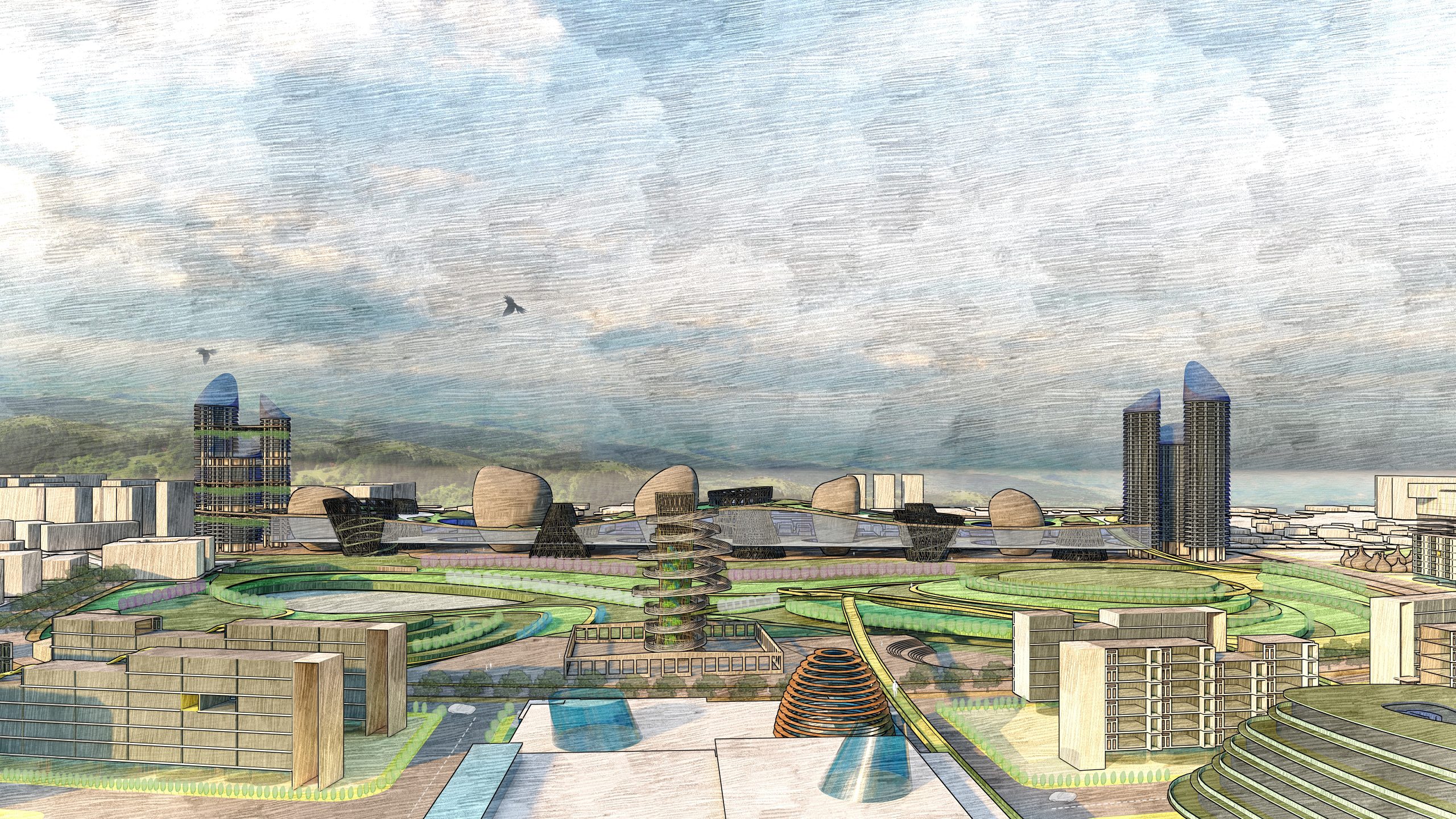 View of The Great Pavillion from the south 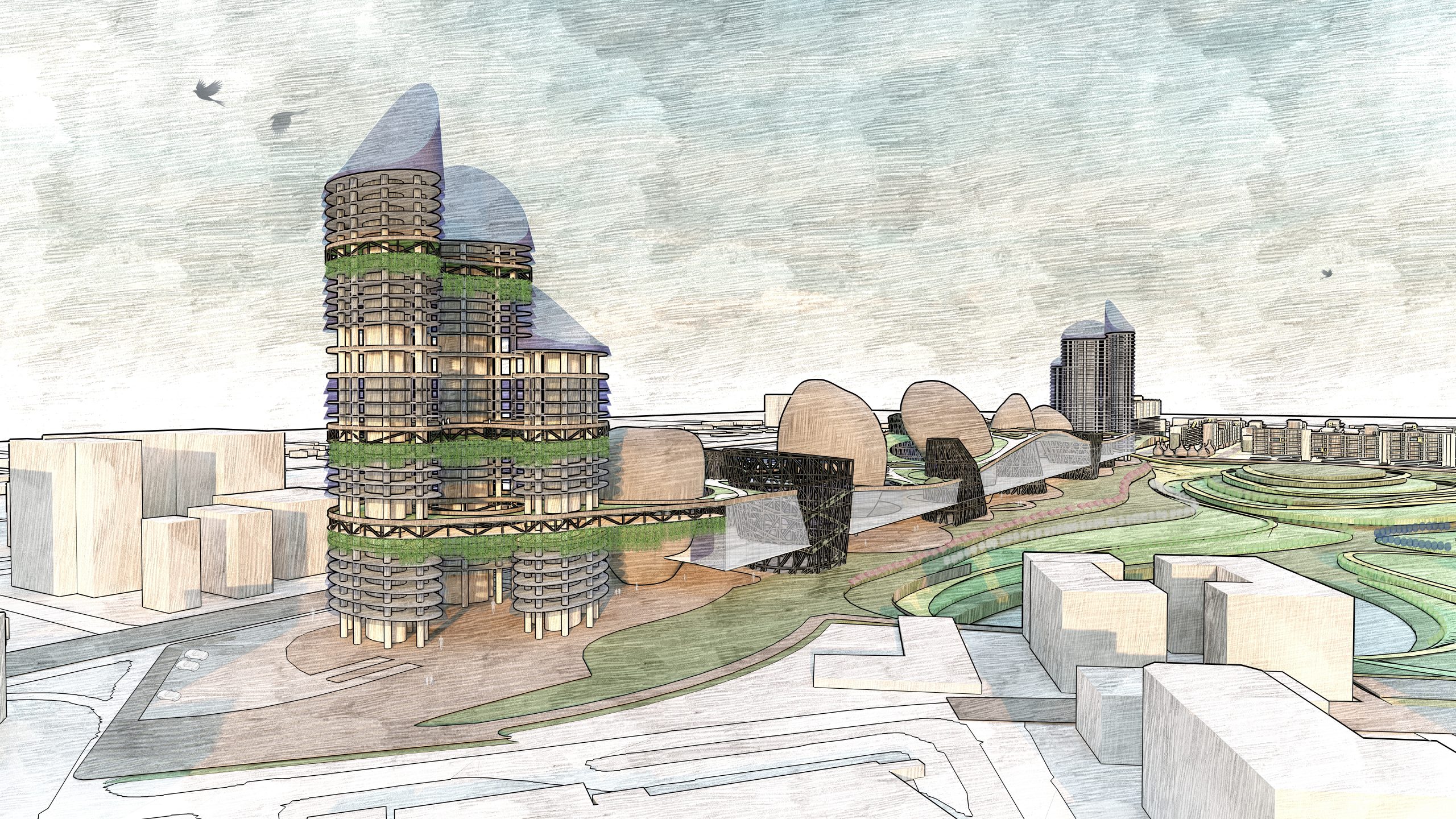 View of The Great Pavillion from the west 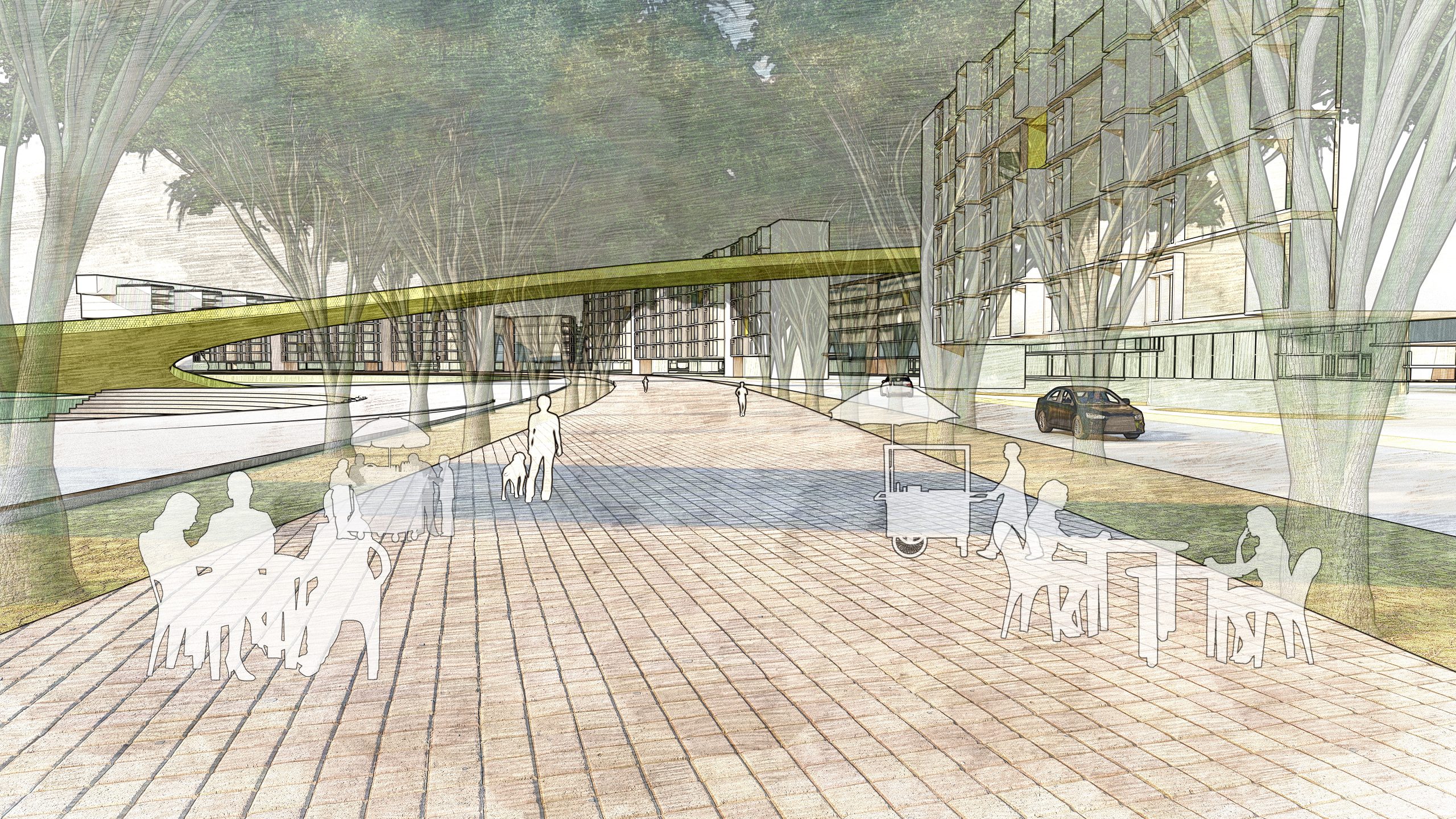 View of the promenade at the boulevard 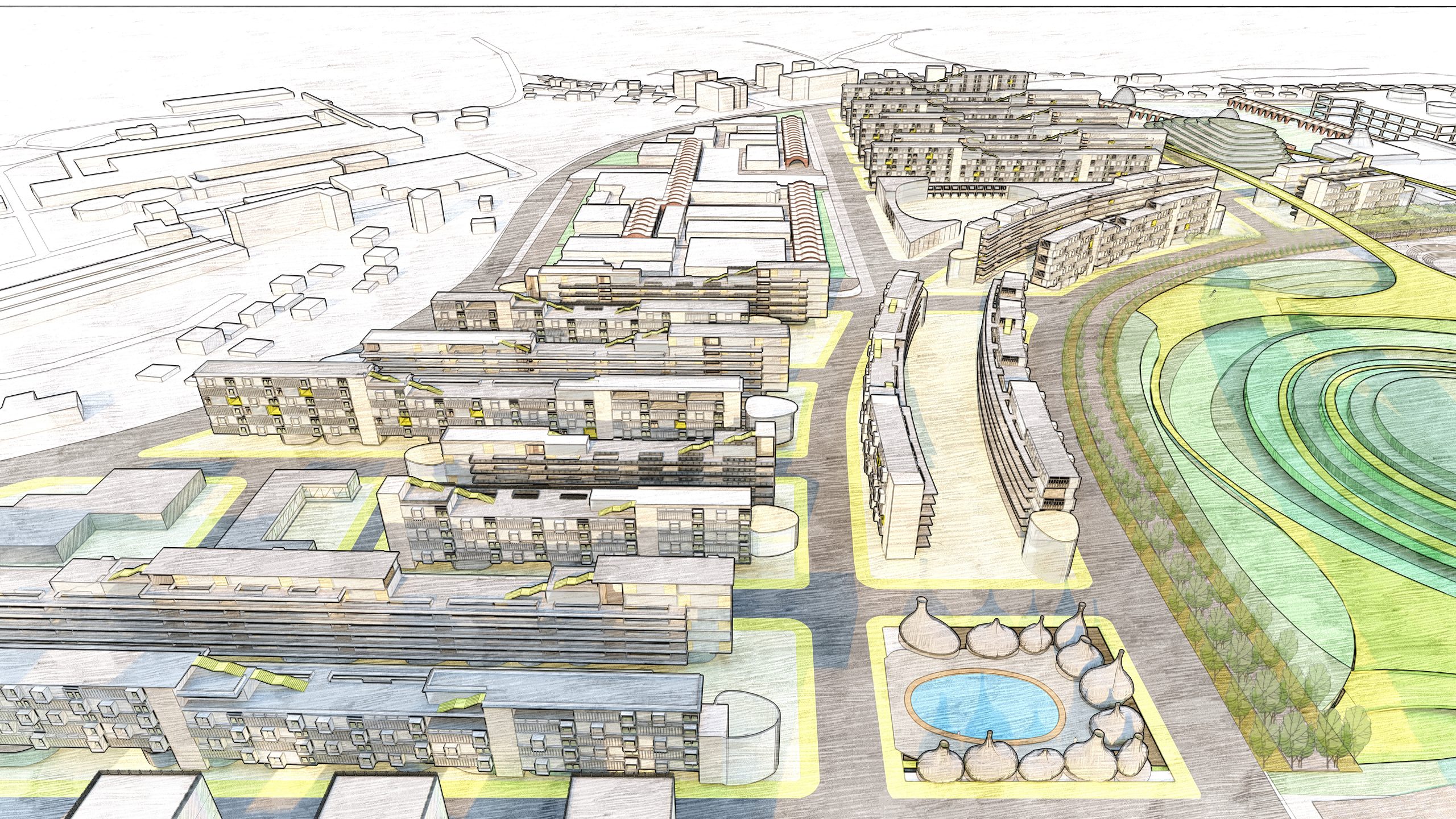 Aerial view of the site showing the housings, bathhouse and boulevard 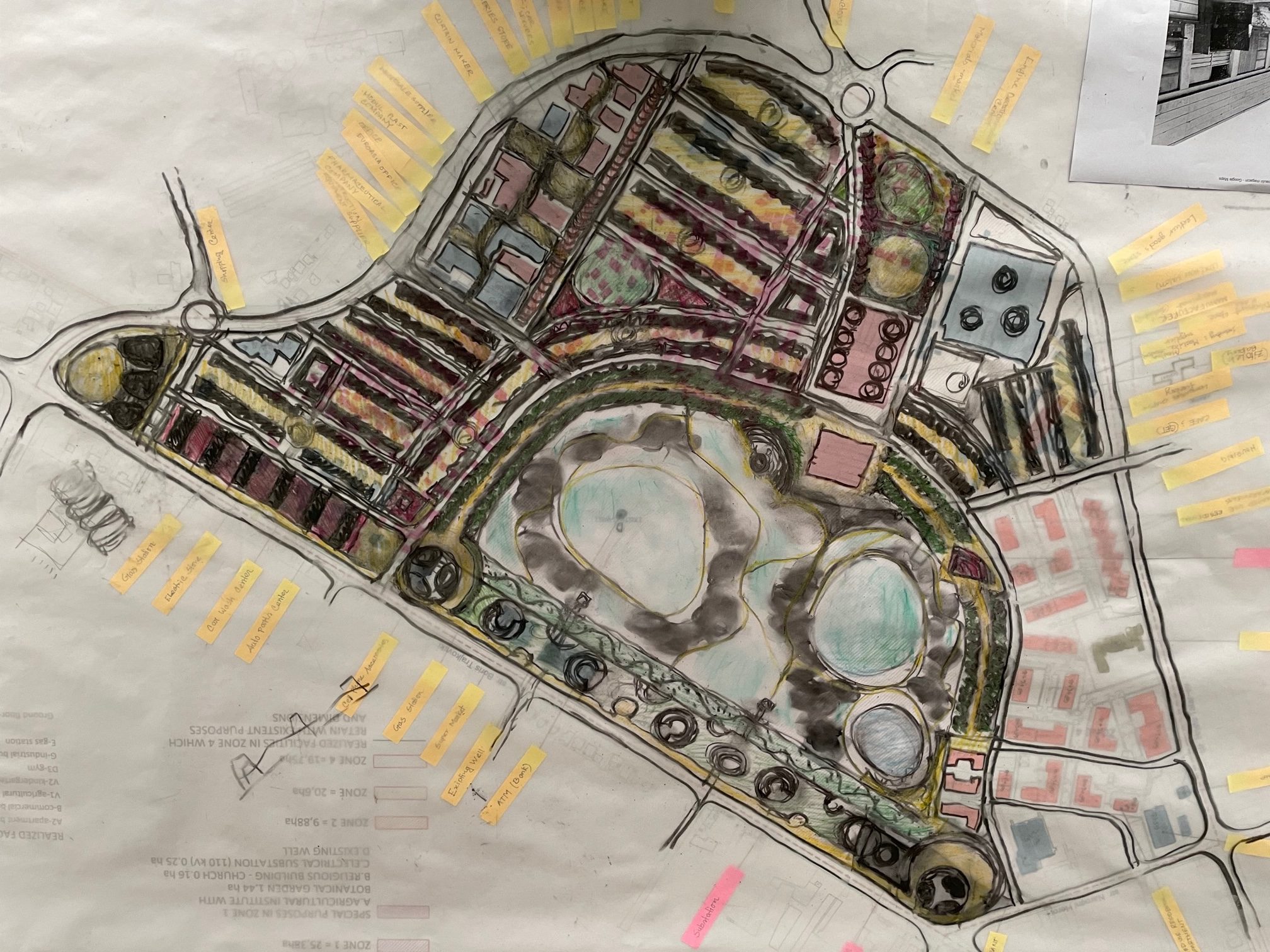 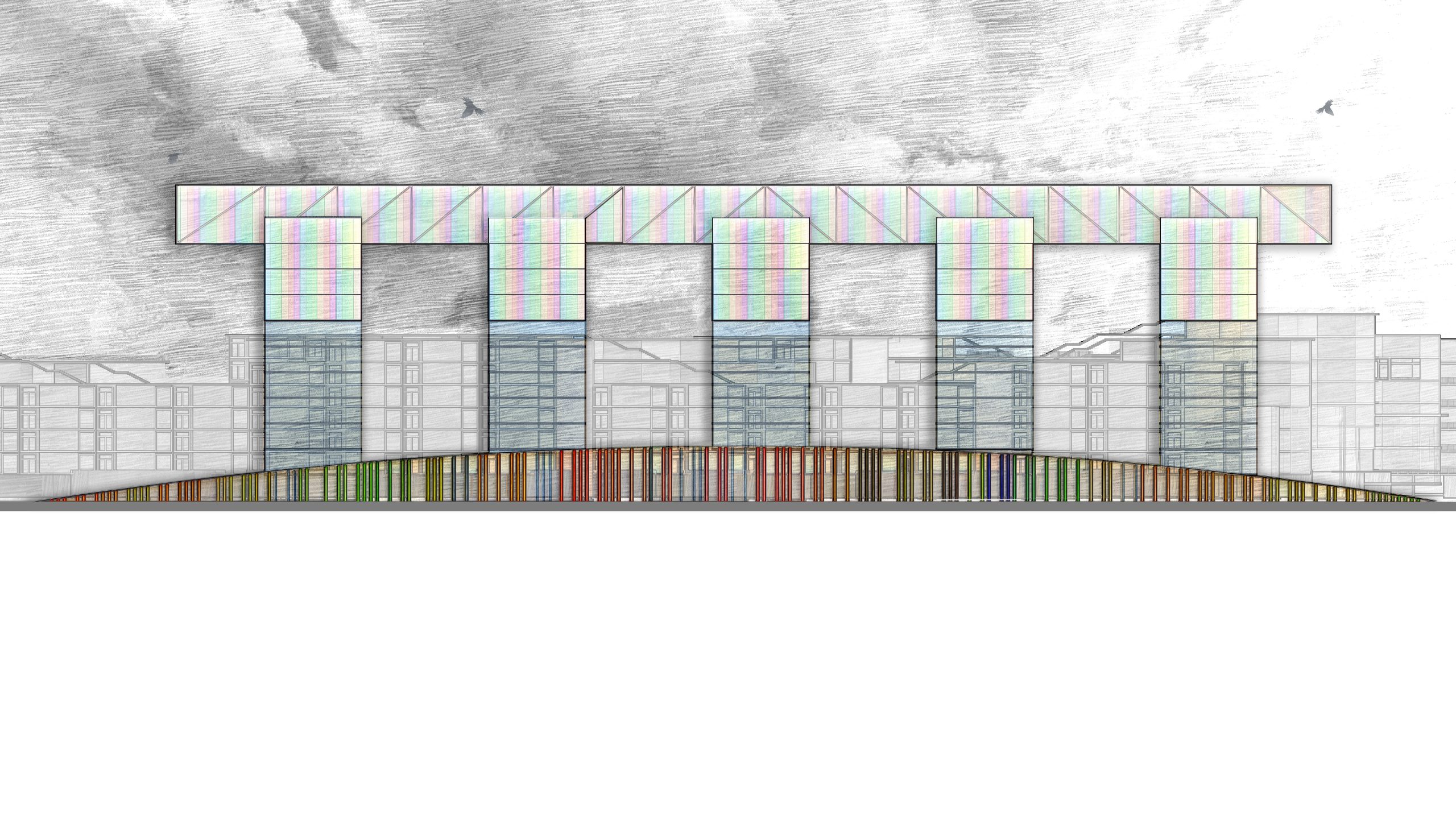 Elevation of the office towers at zone 3 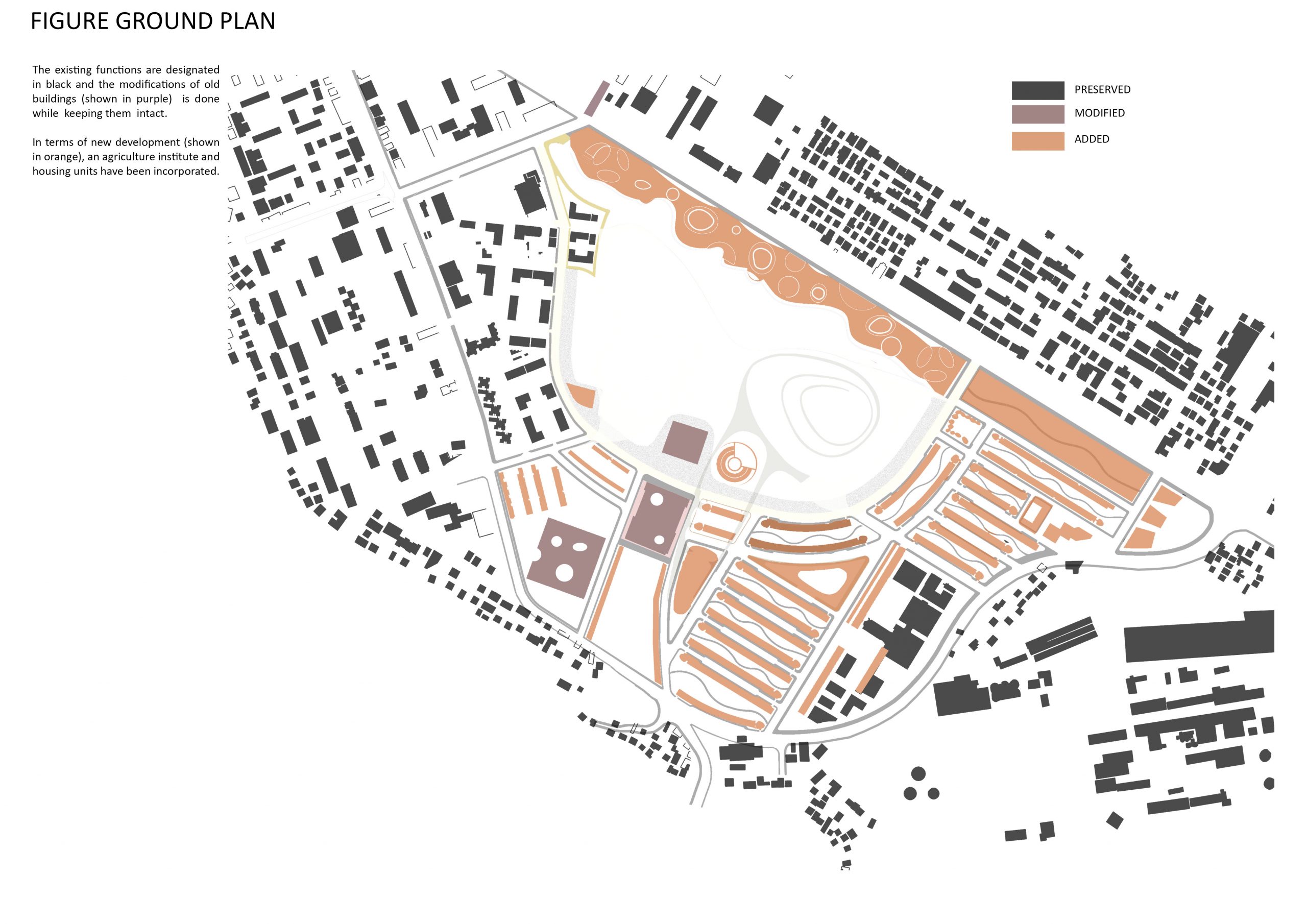 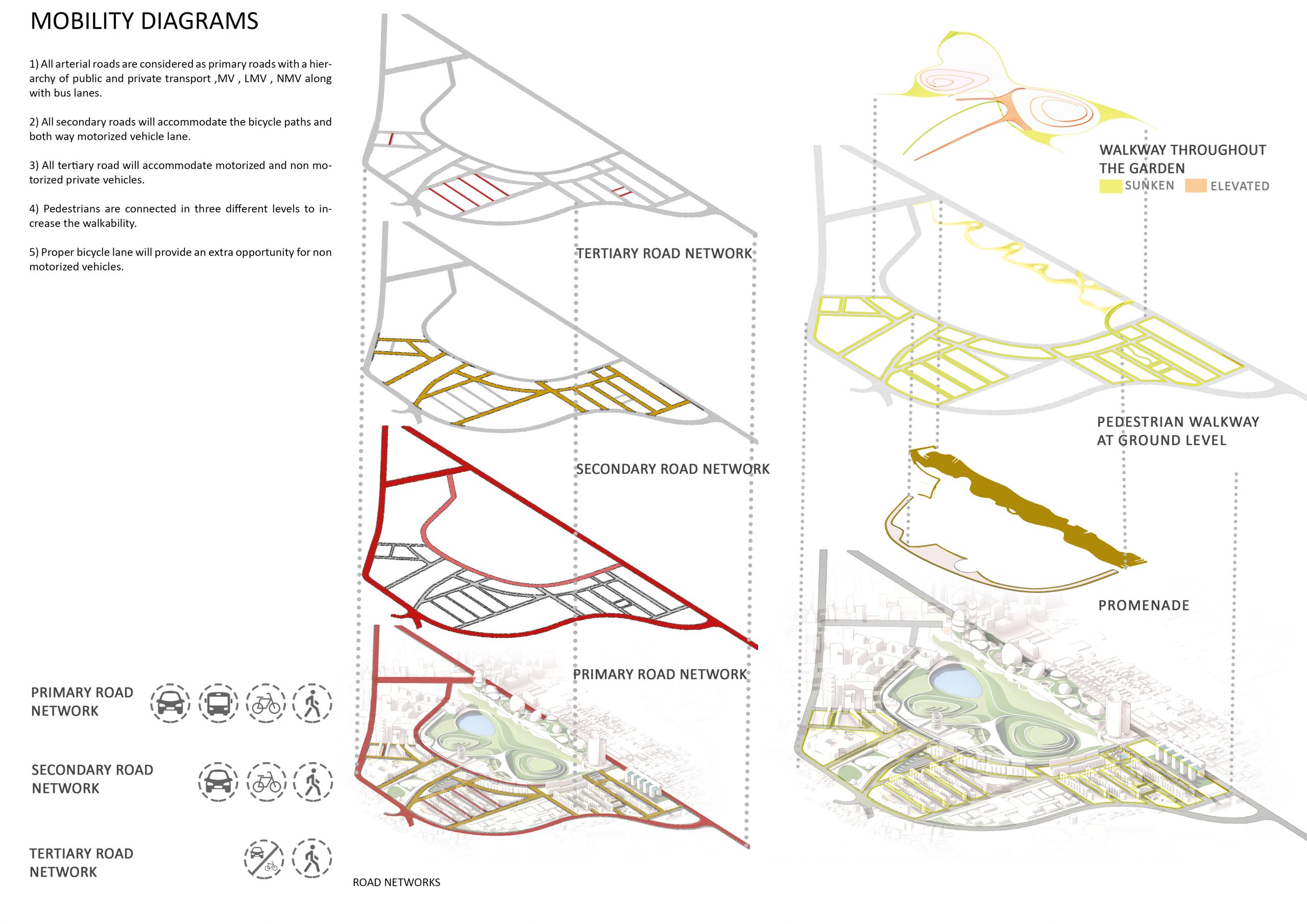 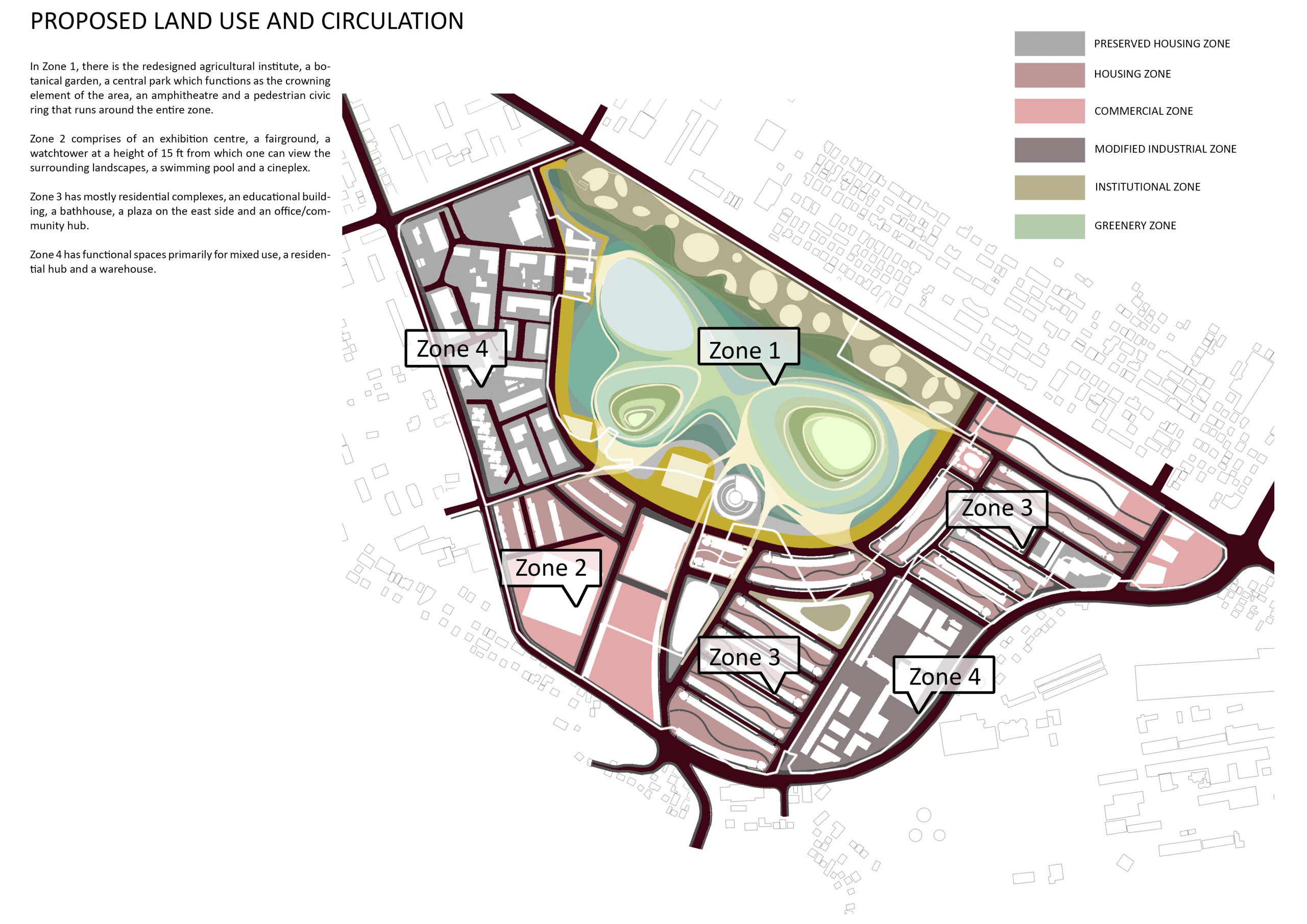 proposed land use and ciculation 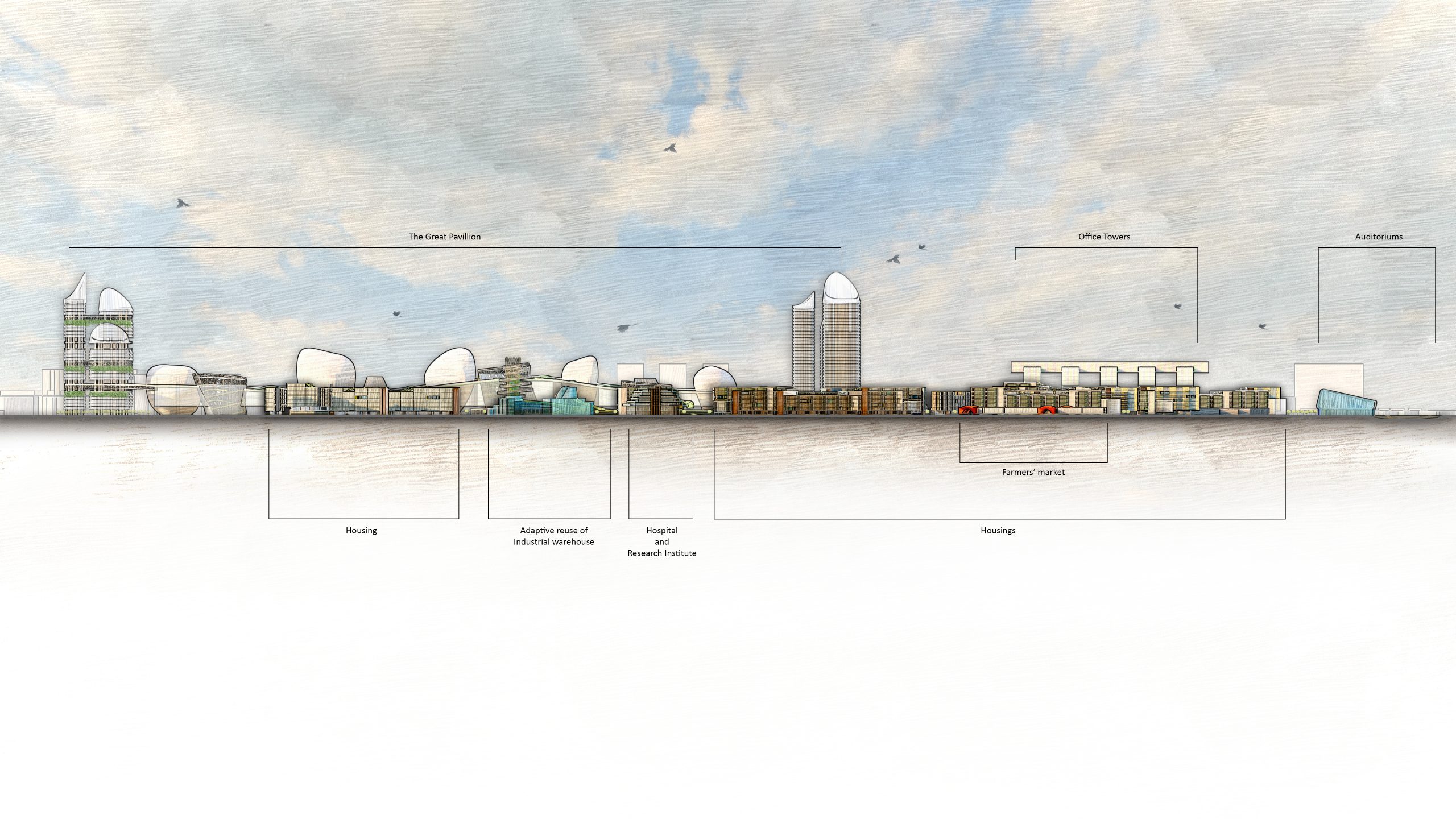 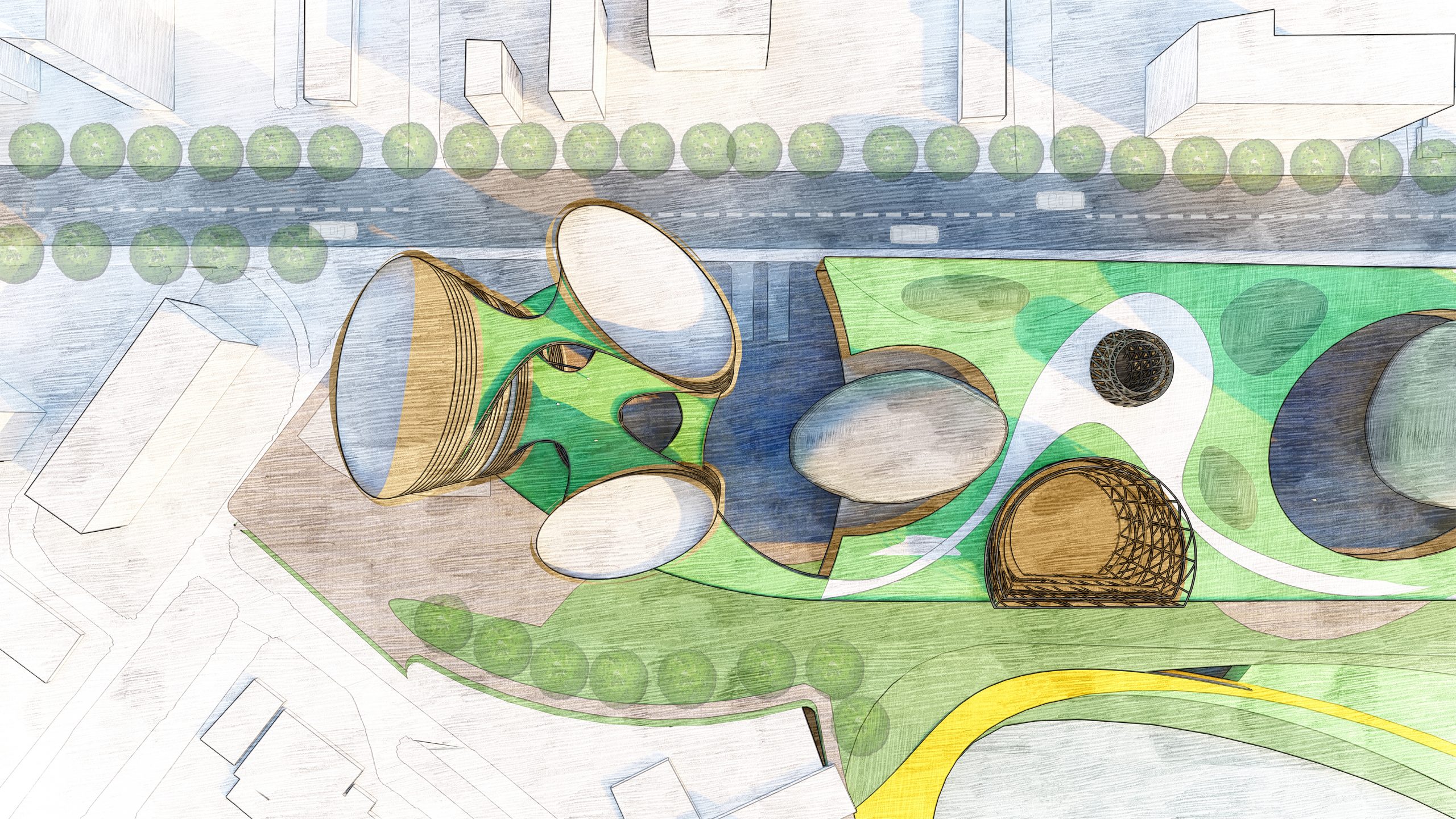 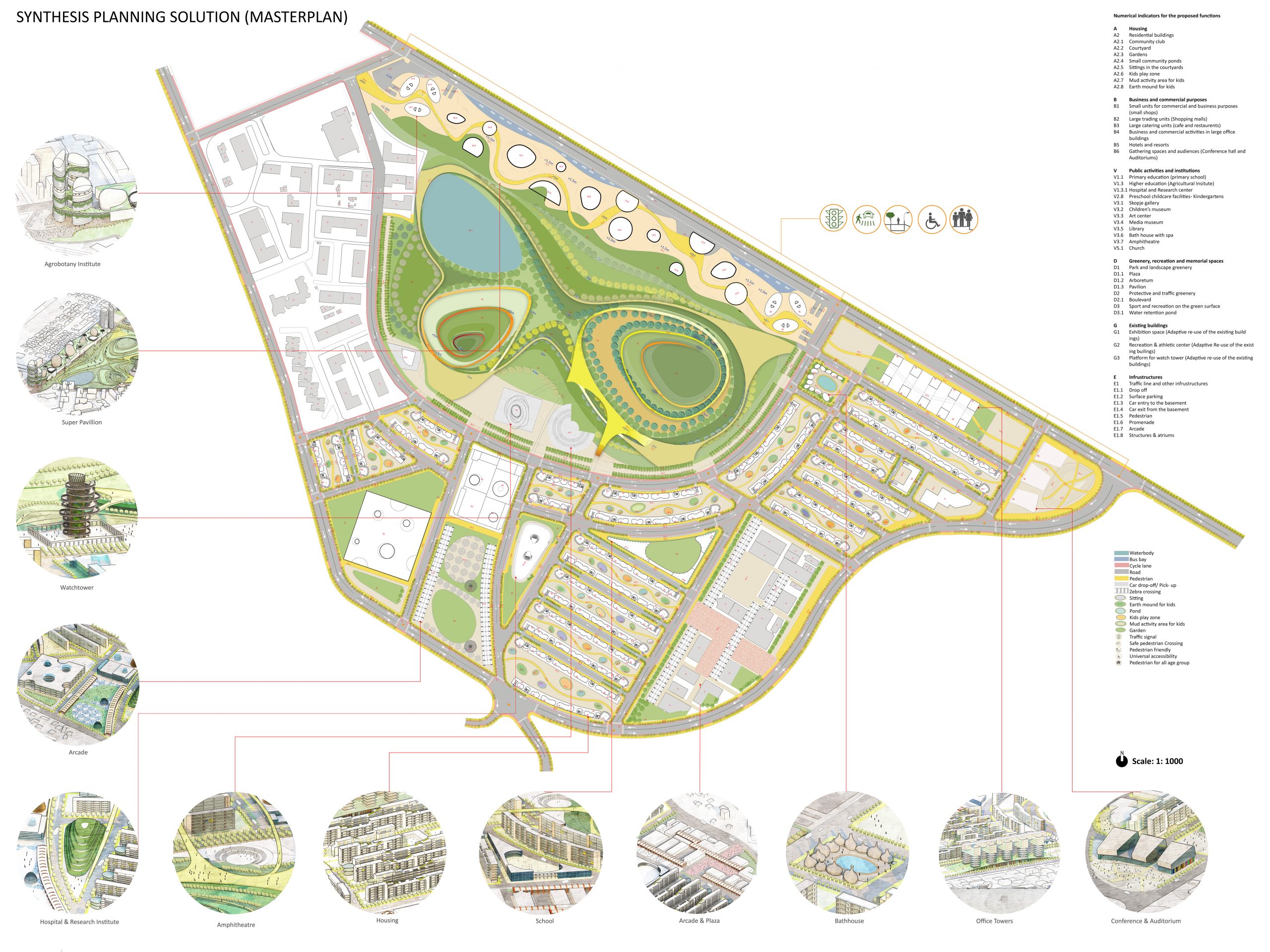 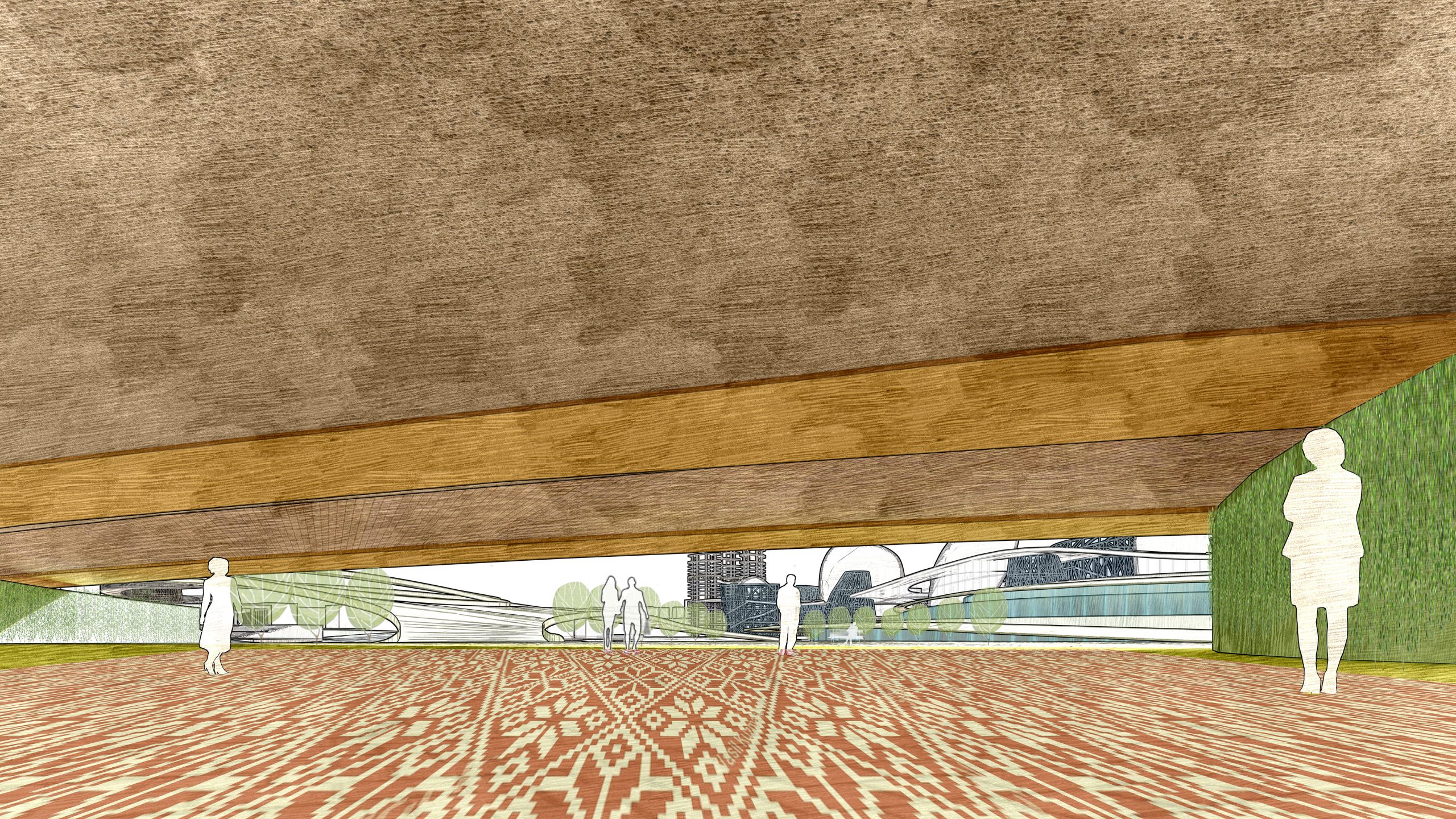 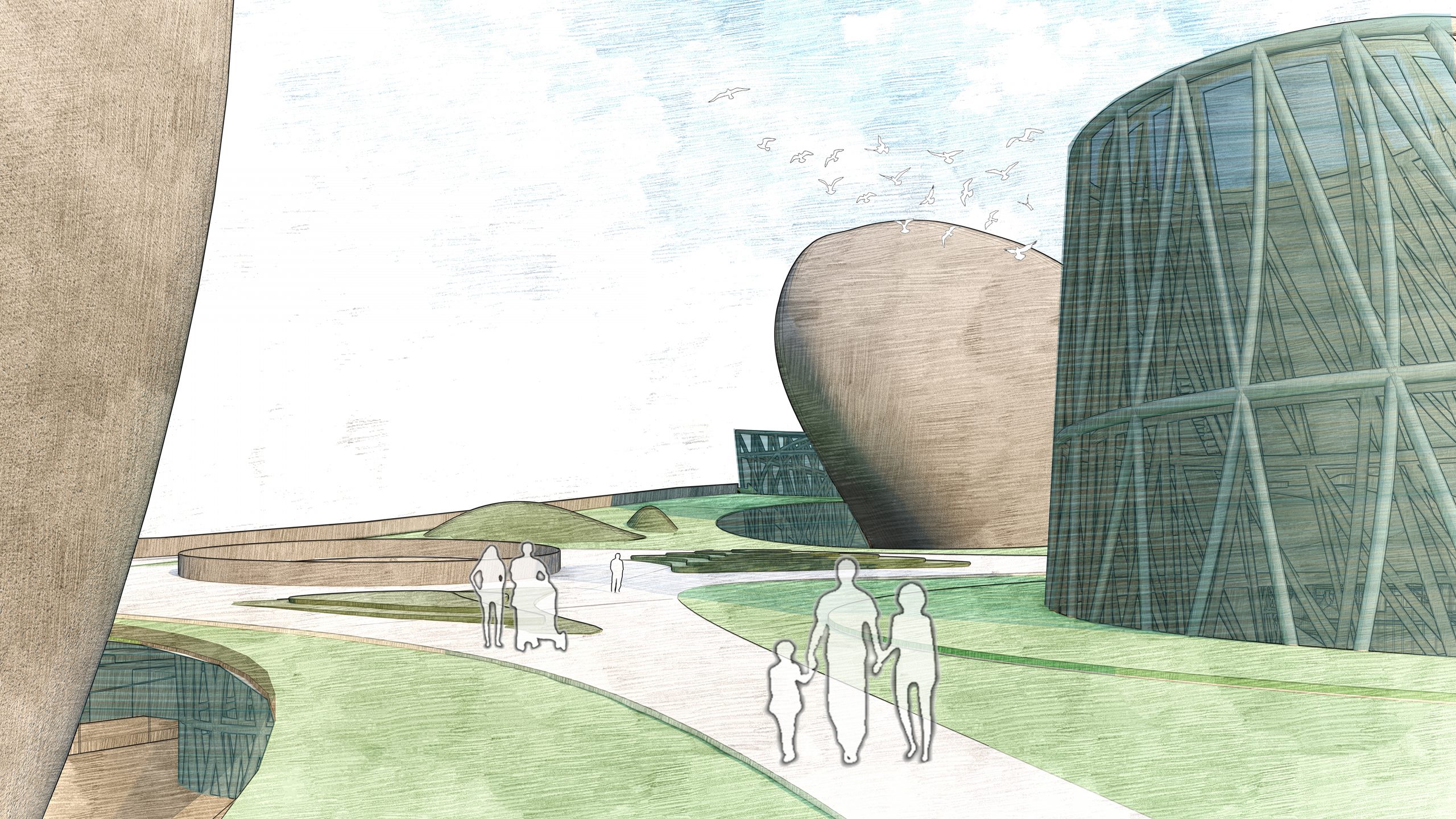 view from the roof top green at the great pavillion_1 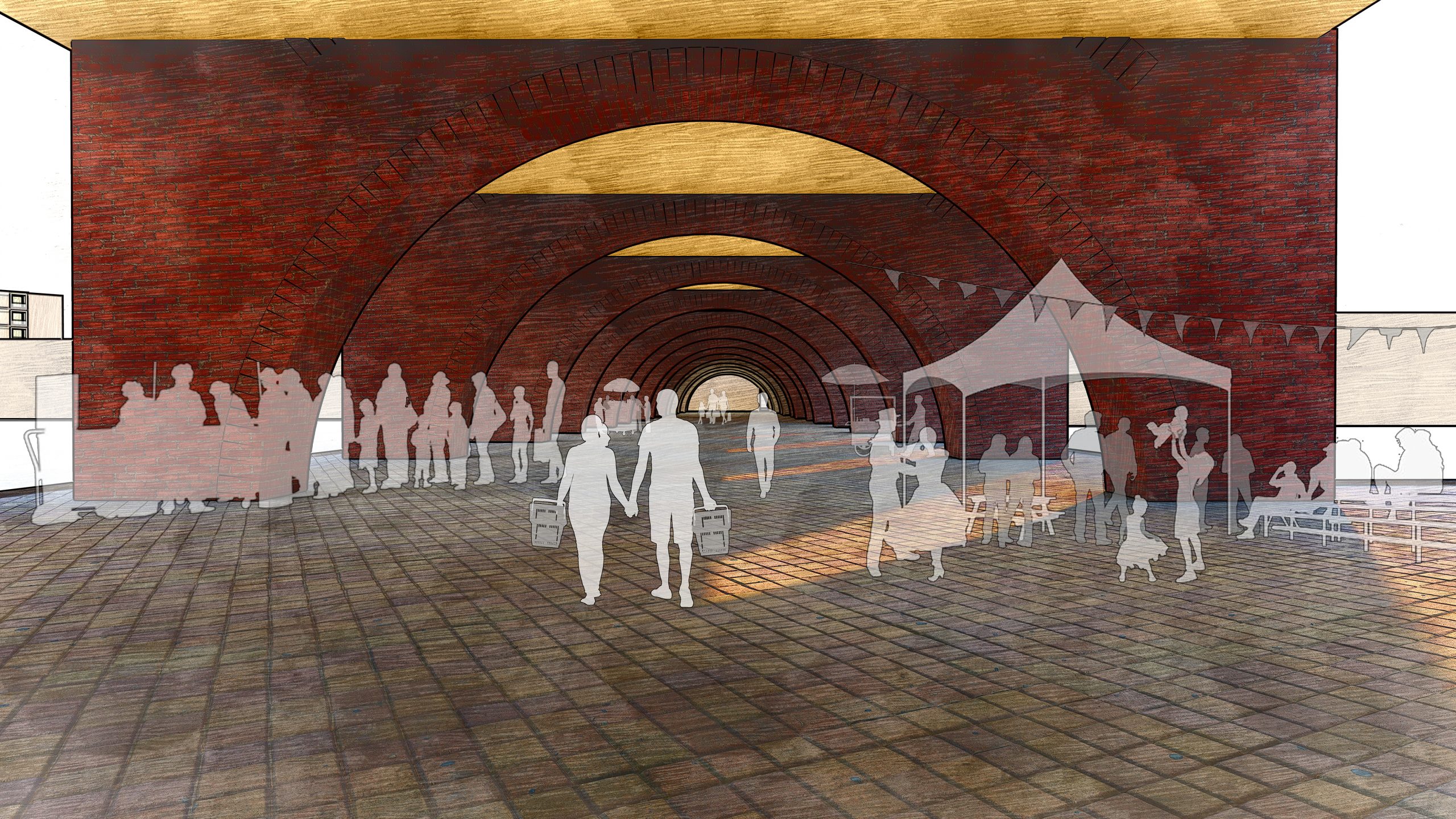 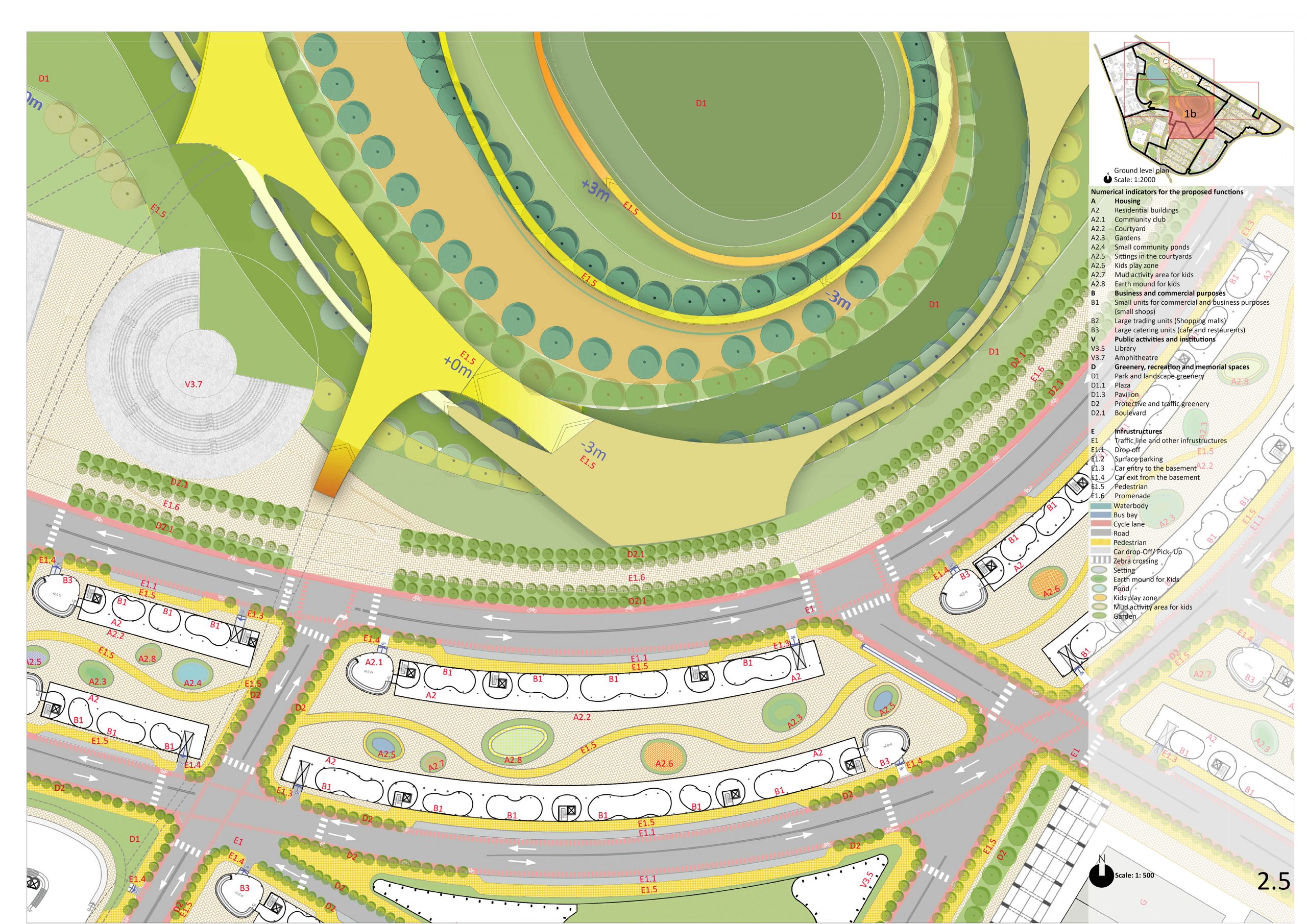 Zoom in site plan at zone 1
Previous Next

The proposed Rasadnik District in the City of Skopje, in Macedonia, is a fusion of urbanism and nature, and a concord between memory and inspiration. The proposed plan creates opportunities for a better, humane and healthy quality of urban living, and amplifies the existing treasury of a green environment. The new quarters in our plan is an integrated network of public, civic, residential and recreational areas, with an elaborate arrangement for a walkable city. Looking forward to the future, the design fuses the character of the traditional and the modern, but always keeping in mind that Rasadnik originated as the first nursery of the agro-botanical department.

The demarcated area for the new development of a new Rasadnik district is a major land parcel, primarily comprising an old botanical garden with a variety of trees, an agriculture institute, a church, and underutilized buildings. This area is envisioned in the proposed urban plan as a potential activity generator, an amplified city center with a new fabric and facilities, in which Rasadnik becomes a new “urban turn” in the rejuvenation of Skopje city. The overall proposal melds the existing and the brand new around a landscape focus, the central green park.

We conceived the overall site in Rasadnik as a “turning point” in the spatial and temporal fabric of the city of Skopje. The area J14 quarter Rasadnik is a turning point in how the city relates there to the mountains, in how the different quarters of the city bend around it, and how the area presents the potential for a more robust and civic urbanism for Skopje. As Rasadnik is the original nursery, the overall site presents an opportunity for the growth of a new city fabric. The central green is the “crown” of the turning force. A synthetic language of architecture and landscape architecture is used to create a new public realm for Skopje that resonates with the nearby greenery and the distant mountains.

The New Rasadnik Plan caters to “the needs of the residents of the municipality for public functions: education, health, social institutions, culture, sports and recreation, a new park area and urban greenery”, as well as housing. The scale and scope of the new plan also presents a robust urbanism for the future of Kisela Voda, and, by extension, Skopje. The New Rasadnik is conceived of as a heightened urbanism that aligns with the geometry and fabric of the existing in presenting the new. The existing and the new fabric, creating a new consonance, celebrates the central green as a crown in the development. All roadways and proposed developments augment the crown by being oriented to and by the central green. The central green is now a celebrated park around which all developments circulate.

Key Features of the Plan

The proposed master plan makes the park the crowning element of the entire district, surrounded by a pedestrian ring and vehicular ring. (1) With a land area of 82.09 ha, the key features in the design for J14 include the Green District, Commercial and the Recreational District as a buffer between the existing city and proposed condition. Residential district comprises Ring Residential Zone and Cluster Residential Zones. (2) All areas are linked by pedestrian corridors and public spaces. (3) Residential blocks are defined by pedestrian spine and courtyard. (4) The existing mountain is reflected in the silhouette of new building  forms, especially in the Great Pavilion. (5) The Central Park is also a big water retention area with the pond feature. Water required for irrigation of the extensive landscape. (6) Almost 40% in consideration of total fabric has been dedicated for Urban Botanical Garden and terrace garden and other landscape features.

Framing the northern boulevard, a “great pavilion” forms an undulating floating volume; it is a civic infrastructure proposed to border and heighten the garden park. Structures conceived as “blobs” and “glass cones” protrude through this floating layer creating vertical access and support for the floating mass. Conceived to reflect the nearby Vodno mountain ranges, this “floating infrastructure” blends seamlessly with the mountainous backdrop. The mountain-like blobs provide voluminous spaces to accommodate major cultural and community congregations, including museums and galleries. The elevated volume and the open ground below offers a stimulating space for its users, allowing spontaneous activation of diverse activities within what is an uninterrupted circulation space. Two clusters of towers bookend the “floating infrastructure” at both ends, one to house a new agro botany institute, and the other for commercial use.

Zone 2 in the south currently comprises one-storey commercial buildings, some of which are abandoned. One of these structures is proposed as an exhibition hall and the open space in front of the hall is proposed as two fairgrounds, with two arcades running on either side of them. There is a canopy on top of the arcade, underneath which vendors can set up their stalls during fairs at the fairground. One of the fairgrounds will serve as a green field and another one is proposed as a plaza. Macedonian traditional patterns are proposed for the surface of the plaza. Opposite the fairground, there is an existing building which will be re-used for multi-functional activities. Behind this, a watch tower is proposed over an existing building, from which one can enjoy the full view of the Vodno mountain on one side, and a full panorama of the park and the project.

Each cluster is defined by two linear blocks on either side and a courtyard in the middle, with a pedestrian path running through the courtyard. There are designated gardens, kids play zones, earth mounds for kids, and sitting areas in the courtyards. The housing units start from the first floor onwards and continue up to six stories, with shops on the ground floor for groceries, pharmacies, salons, cafes and convenience stores. Rooftops are also to be used for community purposes.

A ring road with a boulevard and promenade in the south frames the central park. On the east along the northern boulevard, there are five towers built on a curved podium that house offices, hotels, clubs, restaurants and shops. At the south-east corner, three volumes on a podium serve as cultural centres, an auditorium, and a conference hall. There is a sunken plaza adjacent to the road which is built with a soft-paved surface. In Zone 4 in the south-east, a revised fabric of some existing commercial buildings are reorganized to create a networked zone, encompassing an arcaded farmers’ market. 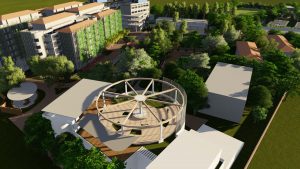 Residential Campus for a University 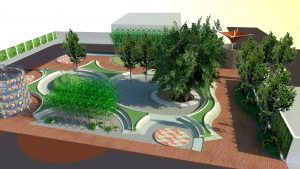 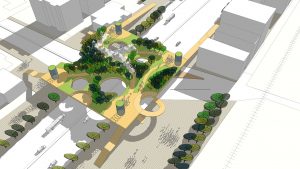