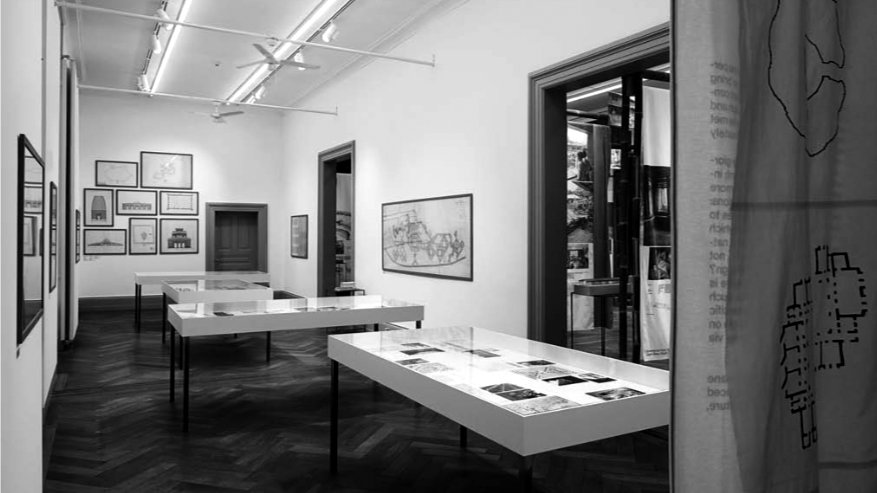 Excerpt from JSAH by Giulia Scotto:

Bengal Stream: The Vibrant Architecture Scene of Bangladesh was an exhibition about dichotomies: coexisting dichotomies, dichotomies in dialogue. The tensions between modernity and tradition, lightness and gravity, silence and chaos, urban and rural, resisting and floating are just some of the productive oppositions that define recent developments in Bangladeshi architecture.

Curated by Niklaus Graber, Andreas Ruby, and Viviane Ehrensberger and produced by the S AM Swiss Architecture Museum in cooperation with the Bengal Institute for Architecture, Landscapes and Settlements, the exhibition brought together more than sixty projects by established and emerging architects in Bangladesh. Two premises are fundamental to understanding Bangladesh’s architectural scene. The first, the geoclimatic, was briefly introduced in the exhibition’s entrance panel. The second, the historical, was presented didactically in the first room. Bangladesh arose from an extreme territory, the Ganges-Brahmaputra delta, a labyrinth of streams, creeks, ponds, marshes, and fertile soil. The monsoons—seasonal warm winds from the Bengal Bay—bring heavy rains that, when added to the Himalayan snow runoff, cause regular annual flooding. Bengali culture emerged in constant dialogue with these unavoidable natural conditions and their rhythms.

The vibrant contemporary architectural scene of Bangladesh, presented in the main exhibition space, owes its timeless language to this dialogue and to the continuous interaction between tradition and modernity, which started with the work and thinking of Muzharul Islam (1923–2012), the intellectual father of a generation of Bangladeshi architects after studying architecture in the United States and Britain, Islam re- turned to Bangladesh and started adapting international modernist principles to local culture, climate, and materials. The synthe- sis he effected required a deep and precise knowledge of little-studied Bangladeshi architectural traditions. His effort was supported by the work of the Chetana Society, which Islam cofounded in the 1980s. The society surveyed, measured, and re- drew the architectural heritage of the delta—from the ancient Buddhist monas- teries and mosques to the more recent government buildings by Louis Khan—as part of a search for a national architectural identity. Several of the society’s detailed line drawings and some of Islam’s projects were featured in the first part of the exhibi- tion. This survey of the Chetana Society’s works represented not a sterile catalogue of ancient beauty but an operative instrument that inspired Bangladeshi architects to keep alive the essence of ancient knowledge.

In November 2016, Bangladeshi architect Marina Tabassum was invited to give a lecture at the S AM. During the lecture, while explaining the historical research that supported the geometrical composition of her Bait Ur Rouf Mosque (Dhaka, 2012), which would later be part of the Bengal Stream exhibition, Tabassum remarked, “The quintessence of tradition is not the worshipping of the ashes but the pres- ervation of the fire.” In discussing the design of the mosque—a rotated square within a cir- cle within the square of the plot—Tabassum noted that she sought to avoid superficial symbolism and explore the essence of spir- ituality, “the connection with the divine.” Pure shapes, simple gestures, and the wise use of bricks produce a series of spaces with different degrees of intimacy, permeability, and intensity.

In the second part of the exhibition, more than sixty contemporary projects, including Tabassum’s mosque, were displayed through images, drawings, and models. The selection included a variety of programs and scales, urban and rural projects, buildings from the late 1980s and ongoing interventions, neighborhoods, museums, hospitals, schools, monuments, mosques, individual and collective housing, villages, and projects of urban and landscape renewal. The projects chosen for the exhibition demonstrated the variety of contexts and situations faced by an active group of Bangladeshi architects, namely, the challenges of a fast-growing, hyperdense metropolis like Dhaka, the extreme meteorological conditions of the delta, and issues of poverty, unemployment, urban congestion, and rural inaccessibility.

large-scale projects dealing with the challenges of uncontrolled urban growth: the Gulshan Avenue renewal and the Buriganga Riverbank design. Parts of a broader vision for the “Next Dhaka” financed by the World Bank, both proposals have raised awareness of the need to define a network of green and public spaces for recreational and ecological purposes. The reclamation of the city’s riverbanks along with the definition of pedestrian paths, bridges, and public water transport will reestablish the role of the river as the flowing core of the city.

Other parts of the exhibition proposed densification of the urban fabric. The most inventive solution in this regard was the multistory Gulshan Society Mosque, a concrete monolithic structure within which—for lack of space—the
prayer rooms are vertically stacked on six different levels. The traditional element of the screen structure, or jali, is scaled up to become the façade and the bearing structure of the building, allowing for natural light and ventilation. This project, by Kashef Chowdhury, shows how the free interpretation of a traditional element ( jali) and an external constraint (density) can trigger creative processes and generate new typologies.

What this vast collection of projects conveyed was the acknowledgment of natural elements—their power and their bur- den, but also their blessing. Every project displayed involved well-tailored, nature- based approaches to ventilation, cooling, bringing sunlight to interior spaces, and, most critically, dealing with the threat of inundation via resisting or floating. This last problem defines the character of buildings in the delta, their materiality, and their relationships with their surroundings. Resisting requires building spaces for water, allowing it to flow in and out, and foresee- ing and directing its behavior without try- ing (uselessly) to obstruct it. An example is the traditional “dig and mound” procedure: digging space for water and using the extracted earth to lift the building above the water level. On the Jamuna River net- work in the north of Bangladesh, Kashef Chowdhury/URBANA proposed to collectivize resistance through the creation of a village plinth, an atoll around a common teardrop-shaped pond collecting water for the dry season. The art of floating, on the other hand, derives its technology from traditional shipbuilding. In a multipurpose structure for the Arcadia Amphybious School near Savar, Saif Ul Haque Sthapati experimented with bamboo and steel drums to produce a linear, floating construction that hosts a preschool, a training center, and a health clinic. The bamboo structure provides lightness and flexibility and allows for various spatial conformations for the different activities that take place there. During the rainy season, the ever-changing landscape of the delta is fragmented into scattered islands, leaving whole villages flooded and often inaccessible for several months. The idea of using amphibious architecture to reach these villages inspires the work of the nongovernmental organizations Shidhulai Swanirvar Sangstha and Friendship, which provide floating schools and hospitals while simultaneously preserving the traditional boatbuilding knowledge…..”

This website uses cookies to improve your experience while you navigate through the website. Out of these, the cookies that are categorized as necessary are stored on your browser as they are essential for the working of basic functionalities of the website. We also use third-party cookies that help us analyze and understand how you use this website. These cookies will be stored in your browser only with your consent. You also have the option to opt-out of these cookies. But opting out of some of these cookies may affect your browsing experience.
Necessary Always Enabled

Any cookies that may not be particularly necessary for the website to function and is used specifically to collect user personal data via analytics, ads, other embedded contents are termed as non-necessary cookies. It is mandatory to procure user consent prior to running these cookies on your website.