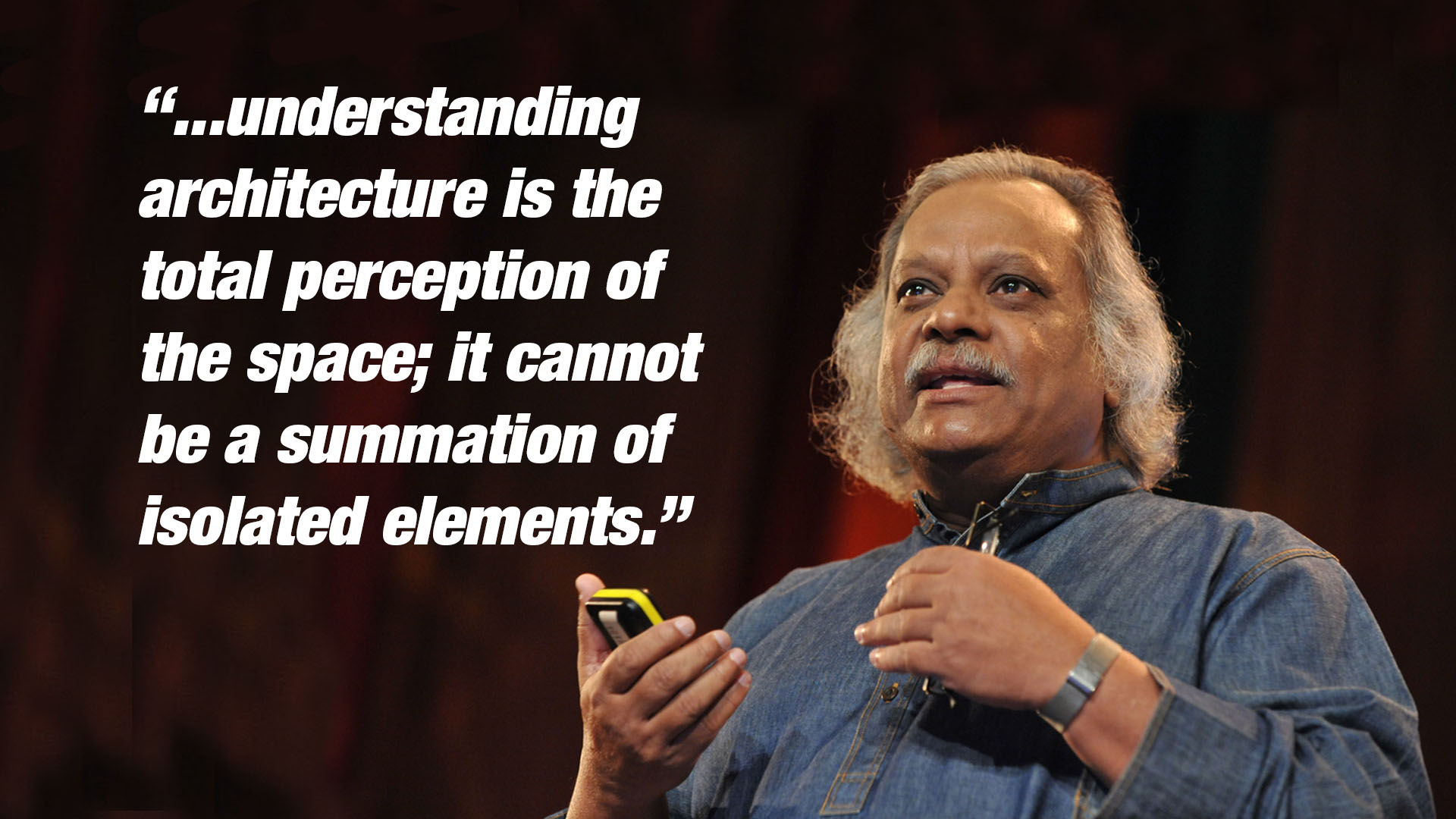 Can Space be Perceived?

Shamsul Wares at the Academic Session "Space is Society" discussed how perceptions are created and how space is a matter of perception.

[This is an abridged transcript of the seminar lecture given by Shamsul Wares at the October 2018 Academic Session “Space is Society” on 25th October, 2018 at Gyantapas Abdur Razzaq Bidyapeeth, Dhanmondi, Dhaka. An audio recording of the full lecture is here:]

There is no one definition of space that can give us the full understanding of it. Between 200-500 BC, the Indo-Aryan civilisation developed, where Vedic civilisation began that resulted in Hinduism. A compilation was formed called Vedas, where there were four Vedas, ভূমি (earth), জল (water), বায়ু (air), অগ্নি (fire) and আকাশ (space) are the 5 ingredients of nature.

What we understand as space can be translated into আকাশ in Bengali, which means infinite space, that is undefined, endless. In Sanskrit আকাশ is the space, vacuum, nothingness, inconceivable. Hence it is difficult to talk about it. We don’t inhabit the ground but rather the space (আকাশ).

Everything feels useless when people start thinking about astronomical space, this is where fear comes in. There is a sense of fear associated with space. We build homes because of protection from rain, sun, animals, thieves etc. But in reality, they are built due to the fear of destruction. The very basis of philosophy was from that fear.

Space is called স্থান in Bengali, ‘place’ in English. But space and place are different. Space is immaterial, non existent, created by innate materials. Place is of materials, defined.

Architecture is, in essence, an arrangement of artificial spaces. Man’s effort to fight against nature is expressed through architecture. It is a protest against nature because of our fear. For that protection, we create a defined space, the essence of this space is artificial. Space is a non-existent entity or a by-product of form. We create a space, we don’t construct it. We construct the form, the space is a by-product. In architecture, space is the objective. We create form for the space; space is our goal or the destination. We cannot construct a space; we can only envelop it.

The soul cannot exist without the body; when the body dies, the soul dies too. Similarly, if the building is the body, the space is the soul. One cannot live without the other. The space that a building contains exists when the form is there. 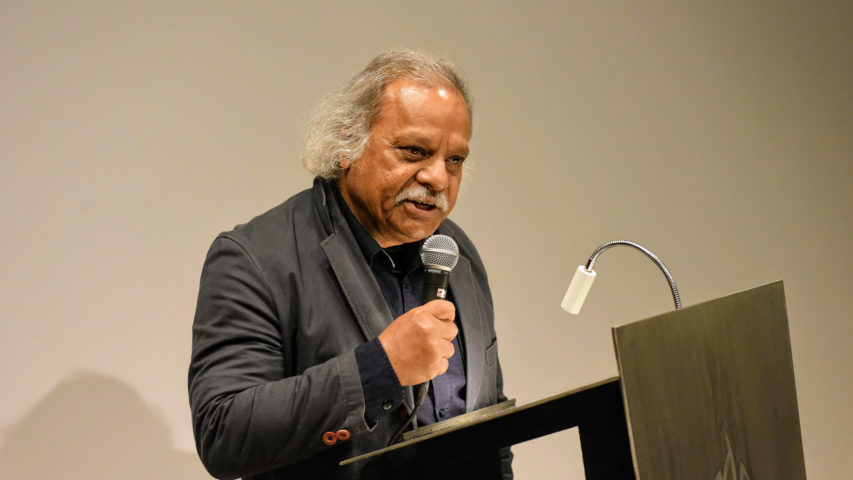 The words place and space are used literally, not just in the domain of architecture. During the modernist era, when architecture was deemed as a language, it was evident that space and place existed literally. This is why modernists were successful in convincing architects and critics that architecture is a language.

When referring to a particular location, we can refer to it as the space between so-and-so place. Place is defined; when it is defined, one should be able to perceive, conceive and understand it. A space can affect someone physically as well.

Space is a matter of perception. Perception is primarily through eyes. Hence architecture is often called visual art. Appreciation of space is primarily a visual experience. Other four senses of ours are also relevant. Animals are more perceptive when it comes to sensing space using the senses. For us, it is intuition. For animals, it is instinct.

Gestalt – According to this German philosophy, the whole space is the summation of the perception of individual elements in a space. That means wall, ceiling, floor every little element that makes up the space.

Due to failure of modernism, today’s architects are looking towards non-architects for the understanding of space. We draw from society, culture, identity, identity crises. This is where philosophers come in. Martin Heidegger said, you start perceiving space as soon as you enter it. It is not a summation of individual elements of a space.

Understanding architecture is the total perception of the space; it cannot be a summation of isolated elements. Architectural perception is in totality. All of our senses compute the results of all elements of a space and give us a perception. When it comes to architectural design, care must be given in creating the entire composition. If you focus on individual elements, it will not work out. Even if individual elements work fantastically, as a whole composition, it may be disastrous. The philosophy of the totality should be transmitted to the individual masses.

When a man enters a space, the space also enters him. It is a total exchange and fusion. His perception is built on the interaction, the interchange and the fusion of the two. On the perception level, man and space become one. The object and non-object becomes integrated to create the perception and creates a fusion of the two. And it happens over a short period of time. Perception is like love, not formed by logical derivation. Both happen instantaneously.

Humans are rational beings; they have scientific reasoning ability. Empiricism and rationalism are two ways of reasoning. Perception is not logical, not verifiable by reason or empiricist theories. It is independent of science. Perception is a domain of emotion.

The reason why modernism failed is because they paid no attention to emotions. Emotions had no space in the modern world. This rationality ruined emotional faculty. The emotional aspects of society was deliberately ruined by modernism.

This is why people read about theorists/philosophers like Heidegger, Derrida. Architecture enthusiasts have stopped turning to architects and are now reading more about the words and philosophy of these theorists. Architects are now being blamed for capitalism and socialist societies.

“Architecture has given a wonderful opportunity to dwell.” – Martin Heidegger.
Then it became evident that architects have misunderstood the concept of dwelling from the beginning of time.

In the 1980s, minimalism took off. Making irreducible elements become irreducible minimum. Minimalists believe that the most important elements were space and light; this philosophy came from Jain Buddhism.

Ernest Hemingway wrote “Prose is Architecture,” after being impressed by modernist architecture like those of Rudolph Schindler. At that point, architecture was considered the highest form of art. Learning from modernism, Hemingway decided sentences must be short, in vigorous English and it must be devoid of emotions.

Older architecture was seen as exuberant, sentimental. Modern architecture was heartless; functioning only with the head. If you have a pleasant way of moving through a building you will perceive the space in a positive way.

Each problem had its own merits, demerits and problems, and you create architecture on its basis which will invariably be new. So we came up with the word ‘avant garde’. Whatever we make must be new and also meaningful for society. But this new society is broken, unlike older times. What society are we referring to? It is impossible to go back to the older society. Time is linear. Every era has its own understanding of its problems, possibilities and frustrations. Every society is made up of its frustrations.

Philosophy used to be based on science. But now there is a belief that if a large number of people believe something then it must be true. Contemporary society is full of contradictions like these. It is the nature of our present world.