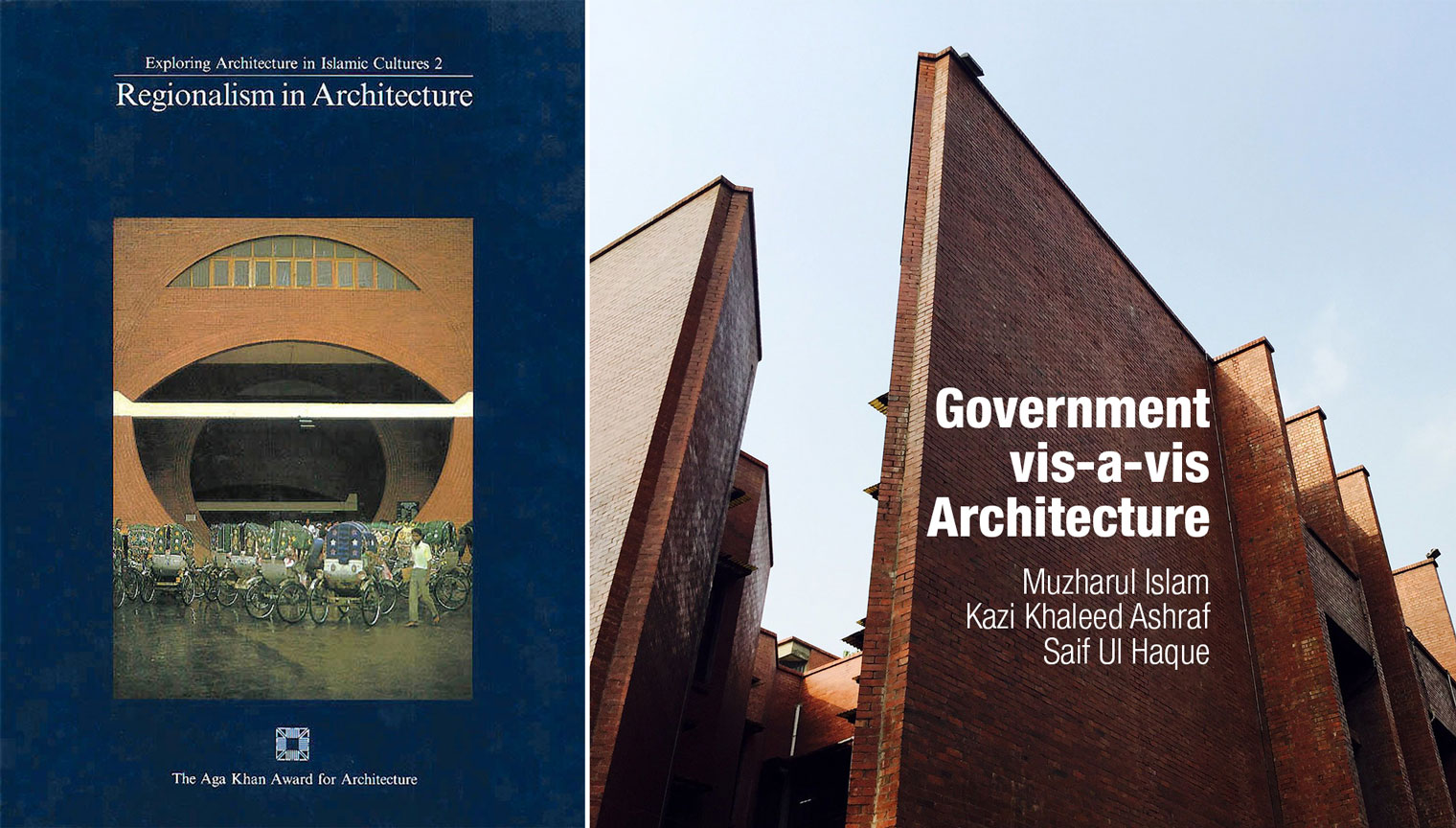 Muzharul Islam, Kazi Khaleed Ashraf and Saif Ul Haque presented a second paper at the 1985 Aga Khan Seminar in Dhaka "Regionalism in Architecture." This text is another example of Muzharul Islam's clear thinking and writing on the role of the government, educational institutions and the professional body in the production of better architecture. Taken from the Proceedings of 1985 seminar.

The relationship between Architecture and the profession of Architecture with the Government of the country is of crucial importance for everyone concerned in countries like ours which have become independent within the last two or three decades. The countries of South Asia, excluding Afghanistan, have all been colonies of Britain. Problems affecting our profession are similar in all these countries and have roots in the common past. The countries of this region have some of the oldest cultures of the world, and are immensely rich in architecture. The contribution to world architecture and culture in general, by this region has been of tremendous importance. British colonisation of this region resulted in a break in the continuity of this rich tradition in architecture. The profession of architecture has yet to recover from this break.

History of the Development of the Architectural Profession in our Country

Since ancient times our people have cities and villages as did other people in other civilisations. Ruins of ancient cities still exist dating back from 4th century
B.C. to 2500 B.C. Through centuries of practice the craftsmen and architects have used materials in forms which are still the pride of our nations. It is true that during certain periods of our history due to inner struggles some of our regions suffered temporary setbacks, but the worst disaster was the advent of the British in our countries. The British came as traders and soon converted themselves into rulers through conspiracy, treachery and murder. For their own purpose they changed the fundamental laws of a country, the economic system, the administrative structure and even the traditional cultural pattern of a society. Although we are not very much concerned with the overall cultural problems, we feel that without giving this background it would be irrational to deal with the problems affecting our profession.

In ancient times, the practice of architecture belonged predominantly to people who developed and modified materials, structures and forms through generations of use. In the rural scene forms developed through the participation of the whole community. In the urban situation some strong ideas or the personality of some creative genius prevailed. In ancient times too the requirements of architects were not that vast or immense, and the need for building new towns and villages was also comparatively slow to develop in our
societies. The situation now has, changed drastically. We are some of the most underdeveloped countries of the world and we want to develop our countries in the shortest possible time.

The utilisation of natural resources, manpower and national wealth requires meticulously worked out plans. Wastage of a single paisa is a national crime.
In this context, the profession of architecture becomes not only indispensable but also absolutely essential. There is no other profession which can plan physical structures and the physical environment for the present and future welfare of the society more economically and rationally. Though it is needless repetition, we are forced to mention that the British ignored or were ignorant about this specific requirement.

Unfortunately, the situation did not change very much after independence. The government of the time took over wholesale, the economic system, the political system and the administrative system created by the British. The administrative system included the department of public works which dealt with large-scale construction of buildings. The need for architects in the public works was always ignored. When the British left, there were no proper schools for training of architects in the country. The bureaucracy of our country had always had little understanding about architecture, physical environment or largescale physical planning.

In our country, the largest quantum of building activity is, as in the British times, controlled by engineers. Engineering education has never been sympathetic to any fine art form, including architecture. As a matter of fact, for some reason, the
profession of engineering has always tried to ignore the need for architecture and physical planning. From 1947 to 1971, the profession of architecture had a
slow growth in our country. The first handful of architects came out of the Faculty of Architecture of the University of Engineering and Technology in
1966. Although we have a population of 100 million, we have only about 400 architects, mostly trained at the Faculty of Architecture here and out of which a
large proportion are working outside the country. (Note the previous paper indicates 200 working in Bangladesh-Ed).

The particular aspects of the profession which ultimately produce a viable and imaginative group of architects are the educational system, professional norms and conducts supported by the legal system of the country, and the attitude of the government and the society as a whole to the problems of physical planning, both large-scale and small.

The educational system for architects in our country should take into account the culture, specially that part of the culture which affects architecture directly, social aspirations, economic problems and constraints, limitations and possibilities of contemporary materials and structures, and specially the development of the form of architecture. In our country, the education system in architecture is totally based on practices in the West and rooted in western culture. Due to the system, architects come out of school with no deep feeling for tradition and culture. In other words, the system does not have deep roots either
in the culture of our past or in the living culture of the present. Absence of knowledge and understanding of this aspect is a hurdle in the process of creative endeavour in our discipline. Any form of creative activity needs an educational system which emphasises an understanding of the people, culture, traditions and history; a system which probes deeply into understanding the unique national aspirations.

For the practice of architecture, it is essential to have guidelines for professional practice and professional fees. In any country, at the initial stage, these develop through mutual cooperation, ultimately achieving form through the collective will and obligation of the profession. For any country which has a developed architectural profession, all these details are defined through legal means. As architecture involves creation of an environment for individuals and communities, both small and large-scale and involves resources, it should be mandatory for the architect to define the scope of his work to the client vis-a-vis his professional fees. Although the main responsibility for creating the legal framework for die practice of architecture lies with the government, the professional institutions of a country also have to share a part of the responsibility. The Government of Bangladesh does not at the present time recognise our Institute. Though the Institute has tried for many years to convince the government of the need for laws for the practice of the profession, nothing positive has happened so far.

Proposals for Establishing a Viable Profession

The negative attitude of the government up to the present day has created conditions encouraging unprofessional and unethical practices It is essential
that this situation be remedied urgently and immediately. The role of architects and physical planners in the development and growth of the country has to be recognised. The profession of Architecture can no longer be ignored in our country. The first step towards a healthy profession is the official recognition by the government of the Institute of Architects Bangladesh (lAB). The next step should be the working out of a legal base for professional practice through the combined efforts of the government and the lAB.

Though at present the lAB is not recognised by the government, there is no reason why its rules, regulations, code of conduct and recommended fee structure cannot be strictly followed by the members by mutual consent. Professional malpractices may enrich a few individuals temporarily but the profession as a whole suffers immensely. For many reasons, Bangladesh is considered far remote and detached from the rest of the world. We have very little cultural interaction even with our neighbouring countries. The Aga Khan seminar is one of the unique exceptions which has provided a forum for inter-communication of ideas and interaction of personalities from the countries of the region and some leading architects in the world. The Aga Khan Award for Architecture has helped in initiating the process of this communication and interaction but the responsibility in the future for such cultural exchange lies with the government and the institute.