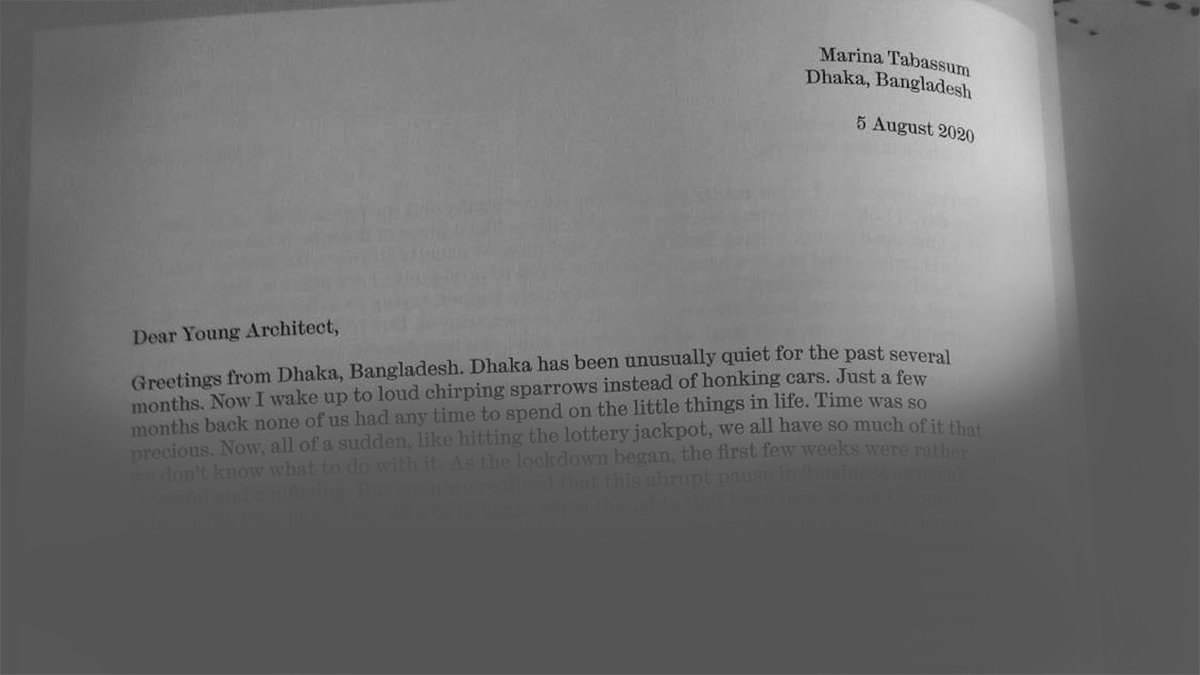 Letter to a Young Architect—Marina Tabassum on the Architectural Review

The Architectural Review asked Marina Tabassum to write an open letter to a young architect, it is originally published in their September 2020 issue.

Greetings from Dhaka, Bangladesh.
Dhaka has been unusually quiet for the past several months. Now I wake up to loud chirping sparrows instead of honking cars. Just a few months back none of us had any time to spend on little things in life. Time was so precious. Now, all of a sudden, like striking a lottery we all have so much of it that we don’t know what to do with it. As the lockdown begun, first few weeks were rather stressful and confusing. But soon we realised that this abrupt pause in ‘business as usual’ is in for a long haul. I would like to share some thoughts that are going through my mind for quite a while in the hope that it may resonate with some of your concerns.

My belief is that we are at a critical juncture of paradigm shift. Right before the pandemic struck, my mind was preoccupied with the idea of de-growth as a plausible alternative to healing the ecosystem. I’m not an economist, but it does not take a genius to understand why capitalism has no cap and thrives on the culture of consuming. Why the disparity and inequity in human condition are growing when the economy is thriving? Why is it necessary to maintain exponential growth that is depleting the Earth causing existential crisis of human and other species? The dominant paradigm has evidently failed to ensure balance and requires critical revision.

A week before we went into lockdown I gave a lecture to students in North-South University where I talked about affluenza and similar socially transmitted conditions. In my opinion the culture of consuming that plagued the entire world for decades is a greater pandemic than the Covid-19. Physiological emergencies, sooner or later, finds remission. But the culture of spending and greed requires much deeper mental conditioning and reorientation of our living and thinking patterns. This is a much greater challenge and may take a few generations to reform.

It is obvious that your generation who will live and decide the fate of human existence and habitability of other species on Earth has a huge responsibility and task at hand. It is up to you to restore the values that went forlorn by decades of consuming. In order to move ahead, at times, it’s necessary to step back, pause and think. I believe we are experiencing that moment of pause.

I am of the opinion that the first few decades of the 21st Century needs to be the phase I call ‘RE’. I am hopeful that the pause of 2020 will help us to rethink and reevaluate our actions, to revisit recall research and reconnect with the age old wisdoms to reorient, reinstall, revise our living patterns by reuse, reduce, repair, recycle, repurpose through a process of regression and resistance in order to reestablish the balance to reassure our existence.