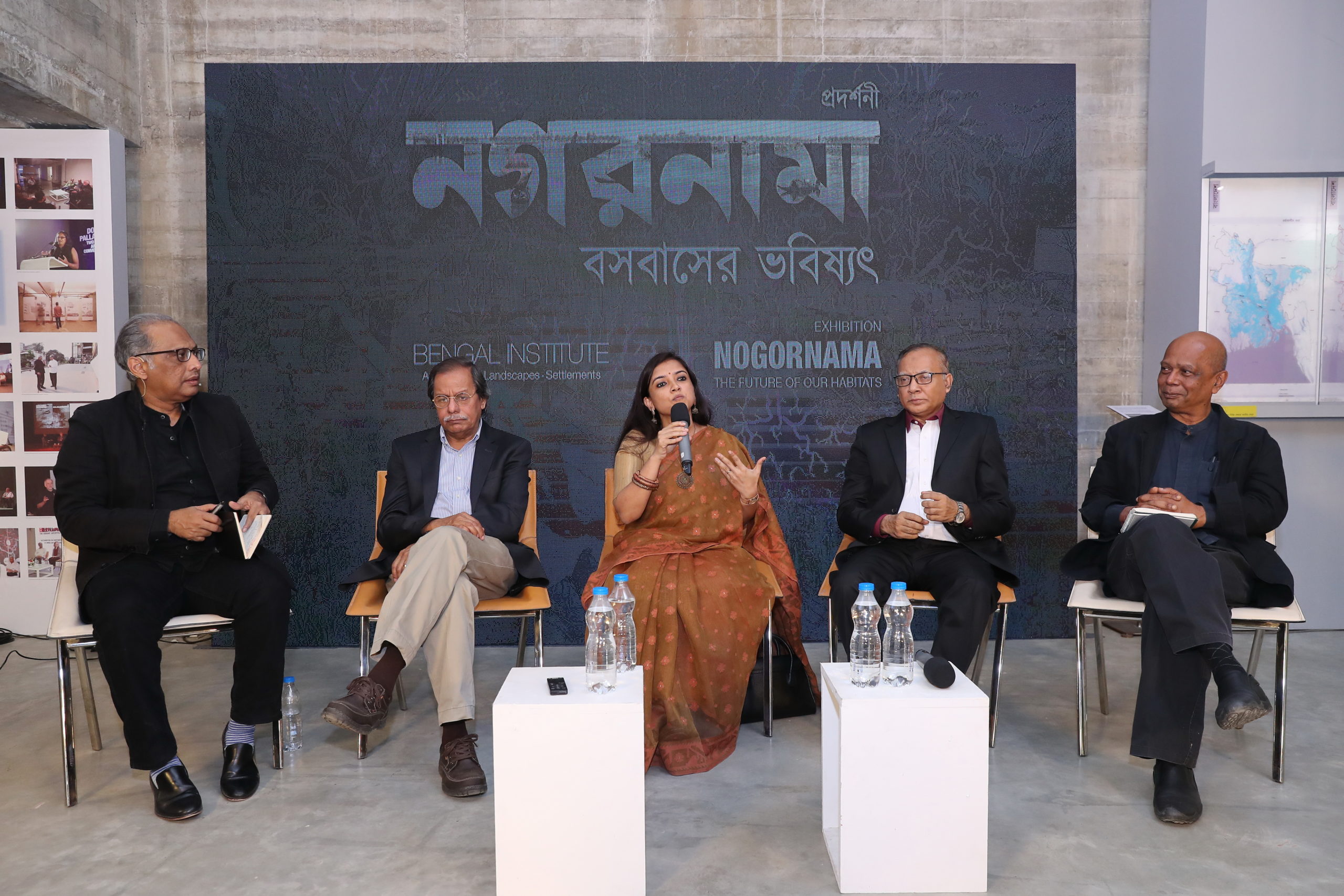 Nogornama: Panel Discussion on the Future of Cities

Saif Ul Haque once wrote, you can destroy a city by constructing it.

It can be assumed that more than half the population of Bangladesh will eventually live in cities. If that turns out to be true, then our cities certainly don’t possess the capacity to accommodate them, said Syed Manzoorul Islam. He questions if we are incarcerating people in the cities.

The situation has become so dire that when we stop at red lights, we don’t know if we will be rear ended or not. Sadly, Dhaka may be the only city where the situation is like this.

We are polluting and filling up rivers, we have handed the water bodies to the corrupt and have encroached into it, rendering the city divided. Whereas, water still has the potential to be the most effective mode of transport. But what is the point of cramming all the offices and services in Dhaka? If someone could live in their home town with complete facilities, most rural citizens would not migrate to Dhaka.

Saif Ul Haque said that while we may live in the city because of economic reasons, there is no harmony of livability here. However he believes Dhaka can still become a harmonious, livable city. He reminisced about his visit to Barcelona in the 1990s, which made him yearn to live in a city with such spirit. He questions, are cities a collection of problems, or a collective solution?

Nobonita Chowdhury pointed out that for a long time we have thought that cities are for young, able bodied men only. But if a city is designed not only for women but also for a 50 year old man, it would be helpful for everybody. She also mentioned that there is no civilized city in the world that doesn’t ensure a pregnant woman’s safe transit.

Khandaker Rakibur Rahman claimed that gets constantly asked by his peers that when will traffic congestion ease. However, he raised another question in response. Why would transport congestion ease when nobody has thought about it in the past during planning?

He believes the way metrorail project is planned through the busiest intersections of the city may be the best they could have managed the traffic around it.

He further raised questions regarding walkability. Whenever we are trying to go somewhere, the first leg of the journey is on foot. But there are no proper footpaths in Dhaka. The existing ones are either broken, filled with garbage or without drainage covers. The situation is dire.

He believes we could have zoned schools in Dhaka and yet we’re still not thinking of it. There is a need for school buses for every school in order to ease congestion. He thinks the aversion to shared transport and prioritising individual transport options is contributing to traffic congestion.

We don’t have an option to rent bicycles and even if we do, there is no infrastructure to support it. This could provide some relief in traffic if implemented. Oversight in the planning phase is the biggest obstacle to future development; we need to plan for transport from the beginning of planning any settlements. There needs to be scientific research and a ‘pedestrian first’ attitude in order to achieve a functional settlement.

But the problem lies in the fact that we have never worked or thought about the ‘pedestrian first’ policy for any planning or design. In that case, how do we expect that pedestrians will get their due privileges?

Kazi Khaleed Ashraf mentioned that we have focused on elevated road first, not the elevated mass transit for the city. He asked Rakibur Rahman if we should have done that.

To this, Mr. Rahman responded that the way new routes are approved in Dhaka is completely wrong. New bus routes are randomly proposed by business entities, without any analysis or data about where the new route is exactly necessary.

We were supposed to live in a community in the cities. Sadly, cities today are the brewing ground of more individualistic cultures. A city doesn’t just have to be communal, a city also needs to allow us to be completely alone.

Short link to this page for easy sharing: http://bit.ly/NogornamaForum