Kerry Hill kindly shared this write up on his 2016 Utzon Lecture with us. Soon after receiving this article, we learned the sad news of his death on August 26, 2018. This article is part of the upcoming Vas-4. 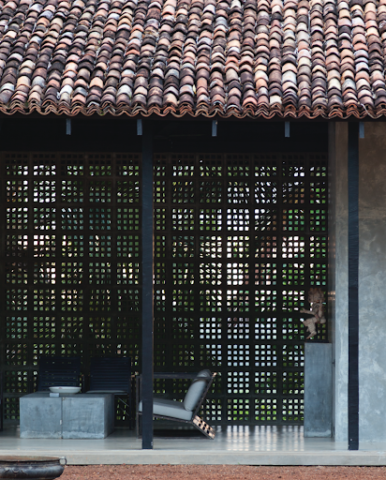 An Australian but based in Singapore, Kerry Hill designed remarkable buildings in Asia and Australia that came to define a new brand of “tropical modernism” that was both minimalist, precise and sensuous, and beautifully adapted to their settings. He gave the designation “tropical modernism” a new definition and energy which is now being further translated by many established and emerging architects in Asia. His work was truly a bridge linking landscape, craft, and modern spatiality. His projects such as The Datai Langkawai in Malaysia, that won the Aga Khan Award, the Amankora in Bhutan, and the Sonar Bangla in Kolkata will continue to amaze and inspire architects.

In this transcript of UNSW Sydney Built Environment’s 2016 Utzon Lecture, Kerry Hill examines contemporary architecture’s reciprocal relationship with tradition. Drawing on his prolific work in Asia, including acclaimed projects for Aman Resorts hotel group, he asks, “What if?” in an age characterized by uncertainty.

When I agreed to give this talk there was only one catch – the title was needed two months in advance. So I chose “Footprints” thinking it would give me plenty of latitude. But of course, it’s never that easy. Footprints are something left behind and in architecture they are most clearly seen in the plan. They also manifest in form. volume. materials, tradition and culture, all of which shape buildings and inform the appropriateness of architecture.

However. it seems that most conversations today centre on the future – topics such as “The Future is Now” or “What Future?” and, more recently, “The Edge of Tomorrow.” So I started to think that perhaps I had chosen a dumb topic for a group of young, forward-looking architects. But then I remembered an old Chinese proverb: “The future is only the past again, entered through another gate.” In other words, the future is informed by the past and it’s a question of how we interpret and reinvent it (if it needs fixing).

How do you appropriate from the past without replication? I believe this calls for a continuous process of rethinking and building on the basis of “what is” and “what if.” This may be stating the obvious, but it is worth serious reflection. particularly as we enter what is obviously an age of uncertainty. one that continues to manifest throughout the world in many different forms.

Epicentres are changing. along with cultural influences. technology and climate, all of which has a profound impact on architecture. We are told that self-contained societies and communities are a thing of the past and that there is now an inescapable interdependence brought upon us by the tide of globalization. This is especially relevant in today’s world, where many of us live and work in multicultural societies in which the idea of what is local and what is universal is intermixing. This is both a blessing and a curse and of course there are also factions who oppose this trend.

During my time in Asia, I have been fortunate in having many people of like mind and different nationalities pass through our doors. This is largely a result of location and it has brought a high level of energy and cultural diversity to our practice. But during this time, I have also experienced the homogenization of cities throughout Asia and the differences are becoming sadly superficial. In today’s world, it would be easy to become pessimistic about the future. However, I’m an optimist, so on a positive note, I believe that in a state of uncertainty we are at our most creative.

Designers enjoy the risks of uncertainty. We love the potential of the fuzzy line that separates the possible from the impossible. Dreaming about and exploring the realms of the possible and impossible is what we do and it is almost always uncertain in its outcome. This calls for reflection on the core values of architecture: identifying why some buildings work and others don’t, asking why some spaces feel uplifting and others are miserable. Firmness, commodity and delight could easily diminish over the next few decades. As the process of making architecture accelerates, we could easily be trapped into designing buildings too quickly, relying on shape and style rather than substance. This will force us to face the omnipresent choice between being in the business of architecture or practising architecture as a business.

I know it is becoming old hat but I have spent a good part of my life working within the world of Kenneth Frampton’s “critical regionalism.” Though I prefer to talk about simply building appropriately, with a sense of belonging. At the risk of making myself unpopular, it’s perhaps the polar opposite to what has been called “plank architecture”: a Gehry here, a Gehry there, architecture at home everywhere and nowhere. This might sound flippant but taken literally it could lead to cities becoming architectural zoos.

I have found that spending time in another culture makes one aware of both the similarities and the differences. This was beautifully said by the Mexican poet Octavio Paz, who wrote, “The only way to know ourselves is to recognize the otherness in others.” So what has this got to do with footprints? Many things. Architecture, in its making, necessarily becomes part of the physical world.

Its form can manifest in diverse ways, but ultimately, each building needs to tell its own story. Just as every person has a life of his or her own, each work of architecture has an absolute value all to itself.

More than any other art, architecture takes time. We align ourselves with ideas to which we aspire. They are the necessary points of reference that shape our thinking on the long journey of architecture, during which we are required to accept, reject, adjust and react to the diverse web of ideas that influence our collective and individual design attitudes.

So how might an architect approach the future? In my practice I have chosen a middle ground and have purposefully allowed a reciprocal influence to exist between my allegiance to selected modernist principles and the experience of living and working in diverse cultures.

I have also limited the theoretical ambitions of our practice to a few qualities I have come to admire in architecture. One of these is exactitude; another is authenticity.

Exactitude is attributed to any object that is constructed with precision, with the right pieces, which has neither too much nor too little of anything and within which one material pays respect to another. It is tangible, clearly evident when attained and should not be confused with minimalism.

Within our search for authenticity, we allow each project to clearly identify itself through place, purpose and material, in the hope that. in Asia at least, our modernist approach might be enriched by accommodating the traditions of the East. We have no formal design methodology, but strategies have emerged through an informal process that wanders between observation, analysis and intuition, between local and universal ideas.

We allow the uniqueness of each situation to influence our decisions but we are not constrained by it and I like to think that the most unifying strategy in our work is the plan. Plans embody abstract notions of building form and volume. They are the key that unlocks an idea and within which tradition lies and cultural continuity can exist.