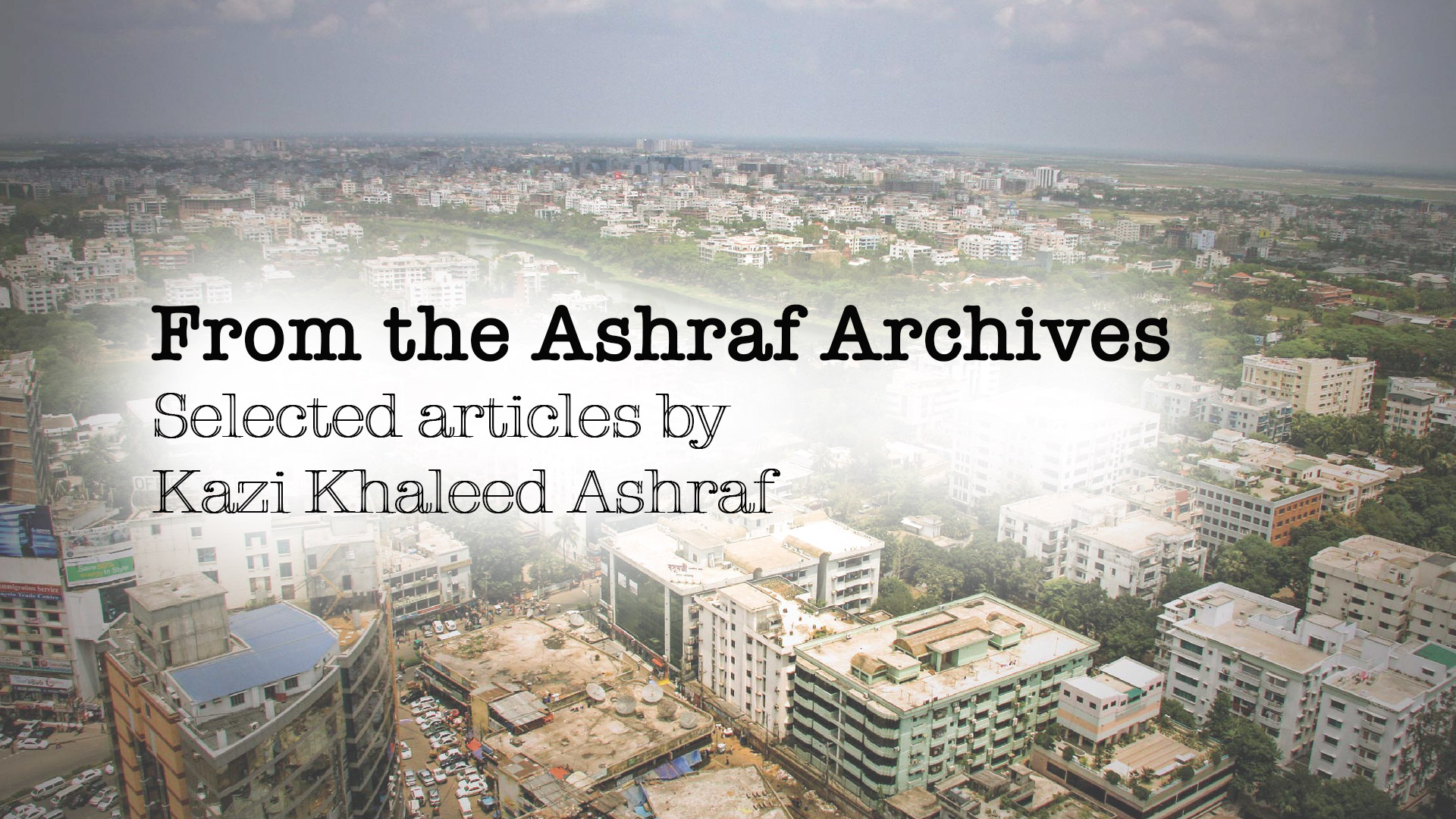 The City is the Challenge

Kazi Ashraf wrote about the key criteria for a livable Dhaka that can be implemented without ecological damage.

Dhaka city has transformed tremendously in the last twenty years or so, sporting sparkly buildings, expensive automobiles, and a greater sense of the urban hustle and bustle, and yet the city continues to be low in the ranking of livability and civic well-being. A more conventional imagery of the city – that newspapers flash on a daily basis is that of environmental chaos where sewage bubbles, fumes spew, vehicles run amok, parks vanish, and lives perish wantonly. We don’t need a member or consultant of some international agency to tell us how messy things are; if we had a little self-respect, we should be able to face the fracas ourselves.

A city is not easy to define. All cities are alike, and yet each city is different. A good place to understand a city is its meaning in various languages, revealing something of the originary condition of the site. Of the Bangla terms nagara and shahar, the former of Sanskrit and the latter of Persian origin, nagara relates to an area of buildings and structures and also describes what is clever and cunning. The nagarika, for example, is someone adept in the pursuit of kama and artha. Suffixes in names like pur, as in Gazipur, refers to a fort, while ganj to a market.

None of these terms suggest the idea of a civic polity, the ethical and spiritual basis of collective living in a city. In the grand sweep of our agricultural rhetoric, our profound and ancient sentiment for the soil, we continue to see the city as a curse when in fact it is now as essential and crucial as the paddy-field.

Bangladesh is still talked about as a rural-agricultural civilization with some bursts of industrial islands, with much of the political and institutional programs embracing an ideology of a perfected “gram bangla.” But in the last twenty years or so, something dramatic and surreptitious has happened: an urban revolution has taken hold of the country. More and more people now live in cities, and if they do not, they participate in the overall dynamic, making cities and towns no longer minor parties in the national framework but active sites of human habitations, relationships, and economies. If cities are the battlegrounds of our anxieties, they are also the decisive places of our imagination and capabilities. As the Brazilian urbanist Jaime Lerner declared, cities are not problems, they are solutions, and therefore they require a more imaginative and critical attention. And that is why we feel anxious that we have not yet been able to draw up a proper urban agenda for the country.

Dhaka is the critical site where the boldest plan for a new urban future ought to occur. However, the city has no cohesive plan and proceeds only with bursts of ad-hoc decisions, usually taken by bureaucrats, technocrats, and professionals with little clue about the life in a city, and indeed no abiding love for the city. The result is the same as elsewhere, where the city is left to dysfunctional treatments: remorseless development, heightening social inequality, increasing community breakdowns, wretched transport, and road systems, blatant occupation of land and waterways, ravaging of open spaces, and, in short, lack of models of how people should come and live together. 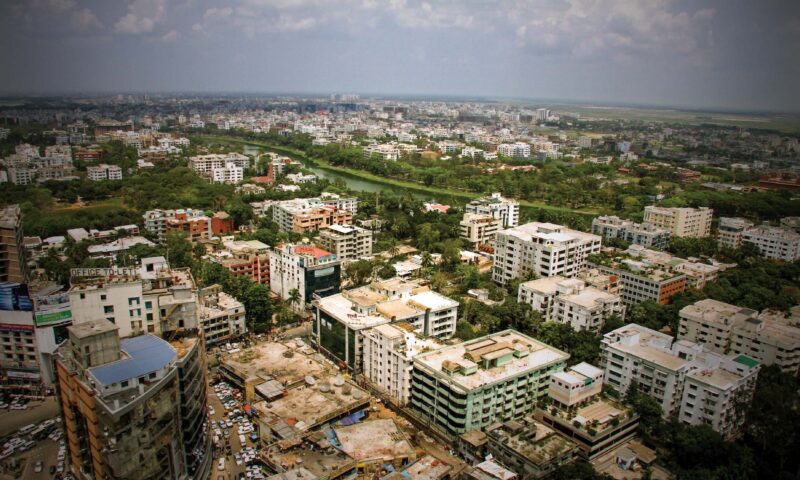 In the absence of any solid tradition of urban civic culture, Dhaka city remains the sole model of urbanism in the country. It is ironic that every nook and corner in the mofussil wishes to mimic the characteristics of a dysfunctional Dhaka. It is in that sense, the future landscape of the country depends on what we make of Dhaka city.

And that precisely is the challenge for Bangladesh: how to make our cities and settlements livable without ecological damage?

We list here key criteria for thinking about a truly urban and livable Dhaka:

1) A ‘good’ city does not happen on its own; it is envisioned, planned professionally, and then implemented with meticulous dedication. To bring real and practical changes to Dhaka, we need a political will, bold imagination, and a serious commitment to carry that out.

2) Dhaka requires a radical restructuring of its transportation network. It needs more roads and more ways of getting around. It is incredible that the capital city of a nation with a population of nearly 16 million has only two premier roads (Airport Road and Mirpur Road) running north and south along the axis of the city’s development, with little connection along the east-west. We should see the active development of a water bus system circling the city following the natural course of rivers framing Dhaka. We need a mass transit railway (overhead or surface) that both circles and intersects the city, taking people off the clogged inner streets and into a rapid system of movement. Finally, to make all these work Dhaka needs a walkable network.

3) Considering that buildings alone do not make a city, but buildings and spaces in a well-knit fabric; urban areas remain the most precious ingredients of a city. Such spaces include vast areas of assembly, parks, gardens, lakefronts, riverfronts, etc. Dhaka one time had an enviable resource of such spaces; now they have either vanished or are vanishing in an avalanche of greed and manipulation. Dhaka could be a garden city where the rush to build does not stop the civilized and healthy need for trees and vegetation at every available space of the city.

4) The merciless choking and polluting of Buriganga have depleted Dhaka of one of its most treasured assets. A radical overhaul of Buriganga River along with its banks and the various wetlands is crucial for an economic, transport and cultural revitalization of Dhaka. The river can again become a major lifeblood, and the riverfront a much more organized area providing renewed recreational, civic, economic, and transport facilities. This applies to all the other rivers around the city. And only then it may be possible discover again that Dhaka is an aquatic city, like an island framed by three rivers with canals crisscrossing it.

5) Housing is the material and social fabric of the city, and yet housing is Dhaka’s greatest failure. Despite what seems like a developer’s boomtown, Dhaka has not been able to create suitable residential models for the many different communities that inhabit it other than the individual plot with the independent bungalow-style house or the boxed-up apartment building. There simply has been no vision of how we should live as a group in new urban conditions. The “plot” and “flat” do not add up to a wholesome urban ensemble, nor create any fabric of a residential complex, a cohesive community with an admirable and collective quality of life. While the thoughtless strategy of making new housing areas by plotting and subdividing land should be ceased immediately, alternative imaginative models of mass housing with greater density and higher quality of urbanity should be explored.

6) A big priority is to conceive the future physical extent of Dhaka in relationship to social, developmental, environmental, and ecological conditions of a wider net. A plan for the capital city needs to be premised by strategies for an overall urban and physical development of the city itself and its larger region; we call it the Dhaka Nexus area. With Dhaka itself, once the footprint of the expanded city is identified, the perimeter should be carefully delineated so as not to affect more agricultural areas and wetlands. A careful balance should be established between Dhaka’s urbanization needs and ecological obligations. Once that is done, it should be maintained with rigorous vigilance. At the same time, Dhaka needs a selective decentralization with pressures from the existing city spread out. This can be done by creating new nodal and satellite towns within the administrative reach of Dhaka but also expanding to regional towns as Manikganj, Munshiganj, and Gazipur. The first circle of areas could be developed as nodal townships within Dhaka, and the second ring of existing towns could be energized to create a network of satellite towns. The new nodal towns should be high-density structures with selective commerce, institutions and government offices dispersed uniformly. Such reorganization depends on a new network of movements that connect the nodes, and this is where the much talked about circular water or rail route may come in.

If the above agenda seems like a pipedream, we can cite many examples from around the world in which the destiny of a troubled city has been turned around. When architect Jaime Lerner took over the Brazilian city of Curitiba as its mayor in the 1970s and 80s, it was afflicted by all the familiar “third world” ills. Lerner changed the living conditions of the city, its ailing economy, the poor transportation system, and the polluted environment, making him quite rightly an urban wizard. Lerner went on to become the governor of the region of Parana, was honored to be the chair of the International Union of Architects, and now goes around cities in the north and south advising on their future. The mayor of Istanbul in the 1980s bulldozed all the industries and warehouses that clogged up the banks of the Bosphorus polluting it and disrupting the city’s historic relationship with water. After the recovery of the open spaces, the city organized design competitions to receive ideas from international architects to envision a future for those areas instead of going ahead with a half-baked and profit motivated plan. Delhi, Mumbai, and even Karachi, no matter how dire the urban circumstances sometimes seem there, have produced many successful mixed, high-density housing models for different communities of the city. The city of Bangkok after years of suffocating smog and traffic is slowly progressing towards a more organized and humane environment after it invited Gary Hack, the urban designer of New York’s World Trade Center area, to initiate a new and bold plan.

As mayor of Seoul in South Korea, Lee Myung-bak undertook radical urban renovations by cleaning and reviving a historic canal (thus producing a significant recreational space and an active ecosystem), creating the Seoul Forest in the city (in a record time of one year with 400,000 trees), and taking down flyovers in order to create a non-disruptive urban landscape. The interesting thing is that Myung-bak himself was involved in the construction of the elevated roadways before he became the mayor which he then dismantled to create the new canal. Later, as president of the country, he continued his civic building projects towards more ambitious and bolder lines such as the Seoul-Busan cross-city canal and the creation of the “city of science” with international schools and state of the art medical facilities. On being questioned about his big, relentless projects, Myung-bak replies, “It’s a simple fact that many cities around the world were benefited by making the best use of their rivers and seas.”

Dhaka can write a new chapter by creating an Urban Task Force. With a government initiative, the task force may be empowered with proper authority and manned by right expertise to prepare short-term and long-term goals for the transformation of the city. If needed, people like Jaime Lerner or Gary Hack, who have experience in transforming cities, may be invited as advisors. The Urban Task Force could take a stance on preparing an intelligent plan for Dhaka as well as urban strategies for the whole country, that is, a coordinated and managed development of a network of primary cities and smaller towns with precise ideas about the constitution of each city keeping in mind interlinked issues of housing, transport, public spaces, wetlands and waterways, and their regional impacts. If there is a political will, there will be a way out of perdition.