The Regional Politics of East Pakistan and Architecture by Doxiadis

Farhan Karim uses Constantinos Doxiadis’s work as examples to show how the birth of nationalism is connected to other parameters. He provides historical background to the architect's work, details his works, and its influence during and after he was working in the subcontinent. He also provided context to the scene in which Doxiadis was working, his companions and intentions of the controversial architect.

[This article is based on the lecture by Farhan Karim at the academic program ‘Muzharul Islam and Bengali Modernism’.]

This time period between 1947 and 1971 is somehow deliberately absent in the works of scholars from both nations, which Karim refers to as an intellectual blind spot. However, we must critically consider that blind spot because it is essential in developing our historical consciousness, which affects the practice of architecture. We cannot ignore that time period, and must recognise it as a part of Bangladesh’s history, says Karim.

From a capitalist perspective, the British played some religious and communal cards against Bangladesh. The British Empire created a narrative keeping a communal accumulation in mind. To elaborate on that thought, Farhan Karim pointed out that after 1947, one of the main points of discourse of our cultural sphere was development. He attempted to highlight how that discourse affected the human experience, which was not a new concept. It began during the Bengal Partition in 1905, when colonisers had the belief that as westerners, it was their duty to provide civilisation to non-white people. This concept existed even in discussions in the liberal west, where it was dubbed as ‘The White Man’s Burden’. The problem lay in the fact that because of their commercial interest, the British Empire did not allocate any resources. Promises of development like building roads and other infrastructure existed in documents but were not carried out in reality.

In the era of post-independence from the British Empire, at the time of the intellectual blind spot, development became the key principle in both cultural and political spheres. It was then that the promises made by the British finally started to take shape. The first development projects of that time period were implemented when Ayub Khan was the president of Pakistan. Ayub Khan created a political structure, and imposed his view of “basic democracy” based on the misconception that the people of East Pakistan were not educated enough to participate in western democracy. Several development projects were thus realised as a result of that political structure. This included the establishment of capital cities of West and East Pakistan as administrative centres, development of polytechnic institutes, rural development centres, new school systems, universities and home economics colleges. Education became the key ideology behind this development discourse, and the education sector was thus allocated with the biggest budget.

It was this ideology that attracted foreign architects to this country, and all their works had themes which could be used for a critical understanding of their works. The first of those themes would be creation of a cultural construct of a Muslim Nationalist, and that was carried out by incorporating the concept of Islam in modern architecture. The second was representation of nationalism in architecture. Other themes included the production of space, the bureaucracy of statehood and the aesthetics of citizenship.

Farhan Karim went on to present a few ideas for arguments, such as studying architecture history in reference to the trilateral relationship among the United States and the two wings of Pakistan in the context of American soft power structure. At that point, the Americans intended to spread their ideology in the global south. For instance, when Edward Durell Stone designed the US Embassy in New Delhi, the design was inspired from Mughal pavilion style. Upon seeing a picture of this structure, Frank Lloyd Wright remarked that Stone’s work was not American enough because it is an American architect’s duty to promote ‘American-ness’ when they work in a foreign land. Thus, the cultural significance of buildings designed by Americans as well as consideration of American liberal ideas to be the yardstick of civilised thinking is what the soft power structure entailed.

Karim also drew focus on the complex of Pakistan military state, and the legacy of invented Muslim nationalism. At that time period, Ayub Khan’s basic democracy was very much favoured by the American observers. Based on the mapping created by Crimson Architectural Historians, we learn that during the Cold War, money was transferred globally from America to support different kinds of development projects across the global south. And to supervise that transferred money, architects were sent as well. Many of the contracts drawn up by the development agencies were thus prepared with certain conditions. For example, the contract prepared by the World Bank for the polytechnic institutes had a condition that Muzharul Islam had to collaborate with an American architect. One may then question, how such projects, built on the basis of basic democracy, influence the aesthetic concerns of architecture. Farhan Karim says they did not have any such influence on aesthetics, however every architect working in this region had their own agency that may have conflicted with the idea of basic democracy.

In this context, Karim drew focus on one architect’s work, Constantine Doxiadis. He considered himself as a historic continuation of the builders who built the Parthenon. He believed that he embeds the entire continuity of Greek civilisation. The first project he was tasked with in Pakistan was as a researcher for an education reformation project, since education reformation was a big concern of Ayub Khan’s presidency. For this project, Doxiadis prepared a massive report after surveying every school of then East Pakistan. It was perhaps one of the first large scale research projects in Bangladesh done by an architect. This was also the time period when Doxiadis urged the creation of contextual ergonomics for the people of East Pakistan. This created a dilemma for him because he intended to create a contextual modernity that would be applied to the design of sixty thousand schools across the country. For this purpose, he created a prefabricated unit based system called metron. 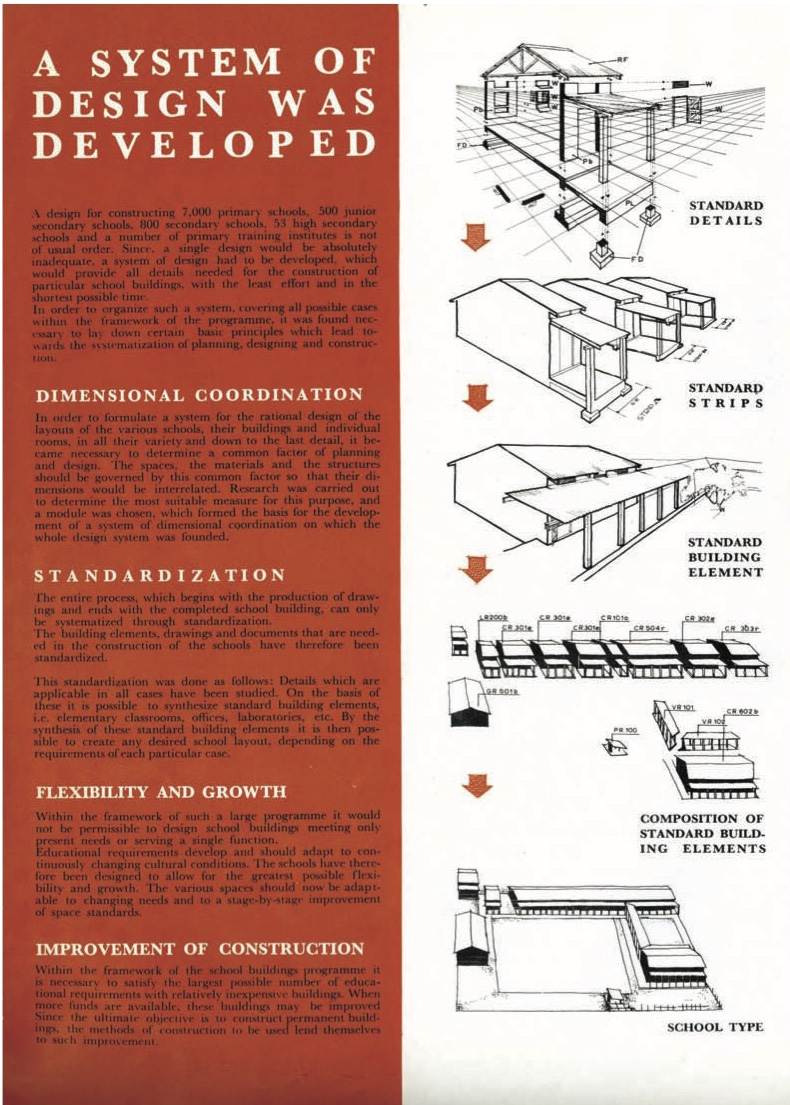 Doxiadis’ idea was that contextuality can also create some sort of universal order. Like Muzharul Islam’s polytechnic institutes, which Karim cites as an example, has a language that oscillates between contextualism and universality. But this also created a matter of ambivalence, that towards which end should the language oscillate towards more – contextuality or universality?

Two rural academies in Comilla and Peshawar were commissioned to Doxiadis during Ayub Khan’s presidency, in order to train the rural people. The one in Comilla had research labs surrounded by agriculture fields, and was provided with a lot more funds than the one in Peshawar which was built in an urban setting. The reason behind this was the agrarian identity of East Pakistanis in the cultural discourse. Between 1947 and 1971, the ruralness of Bengalis was formulated as a political move, and it was represented as a derogatory aspect of Bengali identity. This developed an enigma, and to celebrate that enigma, the Comilla Rural Academy was built as a large scale project. 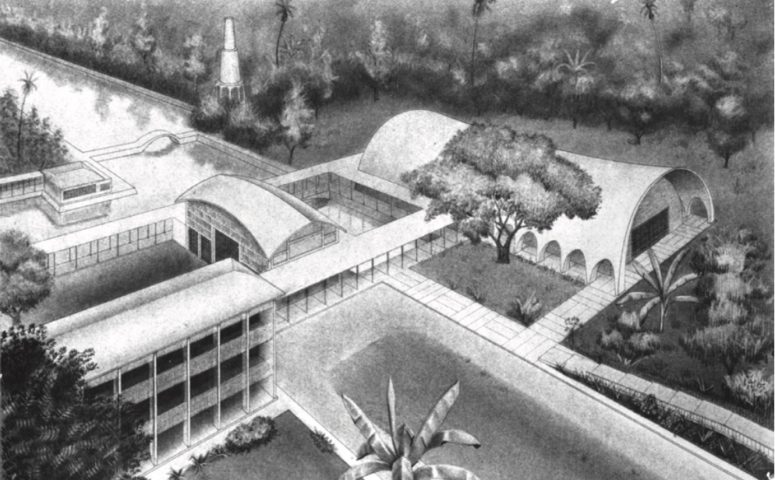 Doxiadis soon realised that the way he perceived the land in West Pakistan was not how he would do so in East Pakistan. The land here is much more delicate so a new kind of architectural language was necessary for this region. He had previously worked in Iraq and West Pakistan, and was familiar with their extreme sunlight and heat. But the tropical dampness he encountered in East Pakistan was a new experience for him, and thus to address that, he added some regional elements to the architecture language that he specifically developed for this region. That’s why he favoured the dochala form in many of his designs, specifically in building mosque structures.

But Doxiadis was rigidly an universalist. He rejected all sorts of symbolism or any sentimental elements in design. To him, buildings should be machine-like. So for him to incorporate the dochala form was an aberration. It was his attempt to be experimental, in order to bring some regional characteristics to design. Karim claims that while there is no written proof, this usage of the dochala form seemed to be a conscious effort by the ruling party to create the illusion of development. Having the dochala form in the mosque was a small way of reminding the people visiting the mosque of their rural roots.

Hence, based on this, it is clear that architecture, in a way, helped create that discourse of development. And because of this, Doxiadis attempted to use that developmental language to present in a package of regionalism. However, during the same time, Doxiadis built a central mosque for the University of Punjab in West Pakistan, without any usage of dochala form. This makes it clear that the whole language of ruralism was reserved for his designs in East Pakistan.

For him East Pakistan was a ‘terra incognita’, a barren empty space. It was Karim’s understanding from Doxiadis’ diary that he had a certain nervousness about bridging the gap between the two Pakistans, which was like an archipelago. How would he create an architectural language that would be powerful enough to capture the spirit of this utopia of East and West Pakistan, that was separated by over two thousand kilometres? Hence, in the 1950s, Doxiadis perceived the land with aerial vision from an airplane. For him it was an interesting view, like a patchwork of a quilt. He realised it was a new kind of landscape, for which he understood there must be a reliance on folk ideology, which was a different kind of construct altogether. It was different from the way Ayub Khan’s ideology presented the Bengali people, which was as a rural, regressive group of people. Doxiadis imagined the folk population as a group of people with collective wisdom others can learn from. He tried to theorise this folk consciousness, which he also attempted to apply elsewhere. For instance, when designing a project in Iraq, he proposed small public squares for women specifically, keeping in mind that gendered spaces was a necessity in accordance to cultural traditions of Muslim women.

However, in the discourse of development, the presence of the subaltern was non-existent in the design process. One may question if it is necessary to have that presence for every project, or if every project requires such presence. The dilemma lies in the fact that the development process claims to have that subaltern presence. And this is the dilemma that characterises the development architecture of a South Asian country.

Farhan Karim ended his lecture with two questions which may provoke one to think of architectural history in a critical manner:

Can we imagine new approaches and methods, that instead of thinking of architecture history as an apparatus to document facts from the past, creates a critical space of thinking?

How can architecture history and its narration be presented more critically, not just on the basis of subjective analysis, like theory and philosophy, but also by perceiving empirical evidence from archival documents? In a way that will provide space for new debates and discourse about the future of practice?

He summarised his talk by saying that a more complicated and critical sense of history is needed for the sake of practice, and one must not consider anything in essentialist terms. For that, architectural history must be written in a critical way, by incorporating archival evidence into it. Because archival evidence is necessary for whoever writes architectural history about the present in the future.