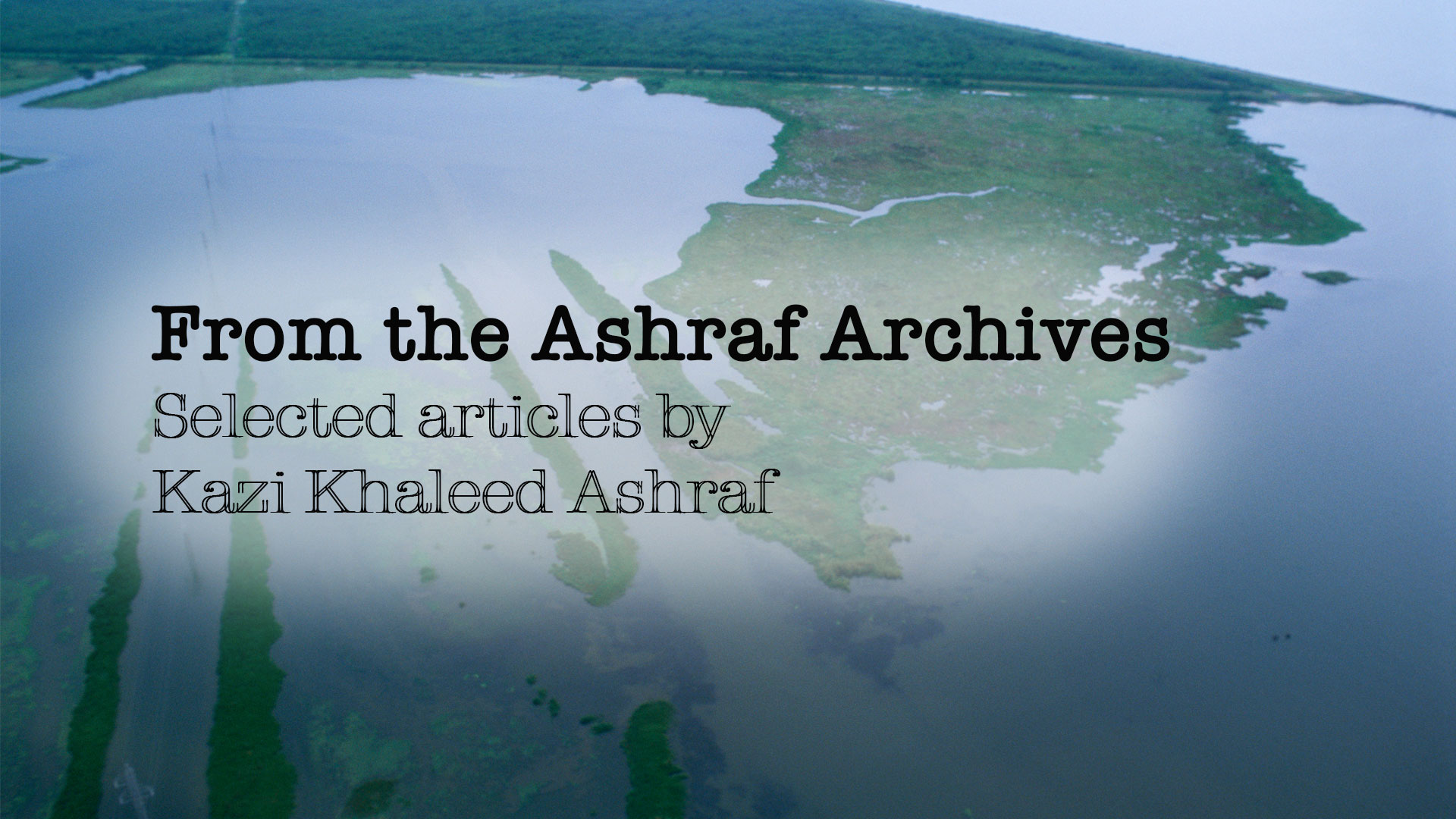 This article is part of a collection of articles from 'The Ashraf Archives' and was originally published in The Daily Star in 2005.

After the levees broke, the spilling of flood waters from Lake Pontchartrain into the large bowl-shaped site that is the historic city of New Orleans was just one effect of Hurricane Katrina that lashed out at America’s southern gulf coast on August 29. The surge of water gushed onto the rest of the country too, sweeping away the complacency and sense of bravado that typically characterised America.

The media images that were beamed out immediately were harrowing and heart-breaking. Nearly three weeks later, America is till trying to grapple with this unprecedented devastation that seems to have stuck at the heart of its existential and psychic core. But it wasn’t the hurricane or the flood that turned the tide so to speak. It was the man-made disaster that followed the natural calamity. People first fell at the fury of the hurricane and flood, they succumbed yet again to the lethal ineffectiveness of the governments, both local and federal, to respond to the crisis as thousands of people fled to what they considered as sanctuaries. The refuge turned out to be a hell on earth. The scenes and stories from New Orleans’ stadium and convention center where people sought relief were incredibly gruesome. And the flight of people, displaced and disoriented, with misery writ large on them, constituted the largest and most horrific urban exodus in recent times.

The entire population of New Orleans has now been evacuated and half of the city still remains under water. When the water is finally pumped out of the city over the repaired levees (and that is the only way to get the water out), estimates are that there may well be thousands of deaths. All this would make it the worst disaster ever to hit the US. Katrina and New Orleans could very well be America’s next turning point.

The inexcusable mishandling of the situation opened old and submerged fault-lines of race and class. In the minds of many it revealed a classic American divide, as TV commentator Chris Matthews noted, in the imagery of white Americans leaving by cars and poor blacks left to fend for themselves. There was no bravado and banter this time as one would often see when Americans faced calamities. Tears and desperation, and anger and rage too, formed the Katrina scenario. For once, televisions reporters failed to maintain their tailored demeanor as they grilled authority figures. Louisiana Senator Mary Landrieu cried openly as she flew over New Orleans witnessing the devastation to her dear city.

Will New Orleans live, or will it sink like Atlantis? Atlantis was a legendary city in Greek culture of which even Plato wrote about. It was a place of high civilisation located somewhere in the Atlantic Ocean and which was said to have disappeared into the sea in a convulsion of nature. Floods have come to New Orleans before, but will the city rebound from this unprecedented devastation? Dhaka has experienced floods, as has Mumbai recently, but neither city has descended into such appalling human conditions and was quick to recover from similar watery disasters. Buildings in New Orleans are almost all of wood; a week under water makes them rot like cardboard boxes. With various kinds of obvious regulations, people are not permitted to build as they like, thus impeding some immediate and self-help responses. Many evacuees, now scattered and sheltered in adjoining states and who have lost everything in the depth of the murky water — home, valuables, jobs, and precious memorabilia — do not see themselves returning. And yet others do, and will have to. People like Wynton Marsalis and Harry Connick Jr., celebrated jazz musicians from the city of New Orleans, cannot but imagine that their fond city, a city without parallel, will disappear like Atlantis and will not be reincarnated from its now watery burial. It is very clear that New Orleans, even if rebuilt as one of the greatest urban reconstructions ever taken in recent times, will never be the same city.

New Orleans is a unique American city but it is built on two vulnerabilities, one human and the other geographic, both of which have magnified the current tragedy. Rich in heritage and a unique blend of cultures, New Orleans is the birthplace of jazz and blues (the airport is named after the legendary trumpeter Louis Armstrong), fusion cuisine, and the renowned Mardi Gras festival. The city is known for its ritual of bands playing at a funeral procession exhibiting the city’s ethos of “mourn in birth and celebrate in death” (but who knew that there would be a celebration of such macabre dimension). And yet New Orleans was one of the poorest cities in the US (and the people most affected by the tragedy were these poorest poor), with terrible a record in crime, homicide, and drugs. And it appears that these marginal people inhabiting the other side of legendary New Orleans were the ones who fell through the cracks of the faulted relief efforts.

The geographical location of New Orleans is unique too. Like Dhaka, New Orleans is a deltaic city, a place created by a romance with water. Mark Childress writes on “What It Means to Miss New Orleans” in The New York Times: “On a foggy night the moon grows fat and full, and hangs in the sky above the big old river. It pours light on the water and makes a magical brown glitter that doesn’t exist anywhere else. The water is the reason the city is there. The full moon pulls the tide into Lake Pontchartrain.” Positioned precariously on a topographical and ecological tightrope, New Orleans was originally built on a marshy land between the Mississippi River and Lake Pontchartrain. The city is below sea level, and the alluvial deposits under the city make it sink gradually, all of which required the construction of levees to protect it from the watery surrounds. The location also makes New Orleans one of the most important seaports in the US (and core of the country’s major oil supply, all of which still remains disrupted), and yet geography may be the bane of the city.

New Orleans will resurface in one form or another but it cannot help but underscore what ecologists and geographers have identified as larger roots of the calamity: the reckless endangerment of the environment and the unimpeded use of fossil fuel. These scientists have bemoaned the scale of nature’s fury on New Orleans on a combination of causes: human intervention in nature without working with its rhythm, the destruction of wetlands along the Mississippi river, the gradual sinking of the city in its alluvial depth, and the increasing evidence of changes in the global climate.

They warn that the first brunt of these calamitous changes will be faced by coastal cities and regions all over the world, cities like New York City and regions like Bangladesh, all of which are precariously close to the sea level. New Orleans may not be the turning point only for America. The destruction and misery in New Orleans is perhaps the tell-tale sign of a coming “world order.” The fate of Atlantis perhaps awaits many.

Written by Kazi Khaleed Ashraf
Published in The Daily Star on 21st September, 2005